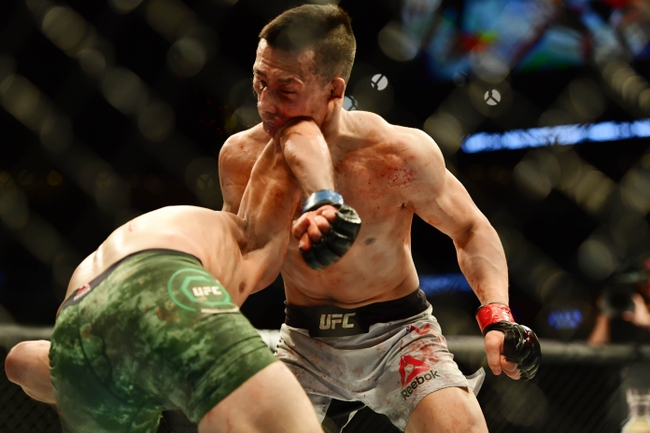 The Latest Finishes In UFC History

While fast knockouts are exciting, they can be a bit unfulfilling because you didn’t get to see a full fight. The late finishes provide the best of both worlds, as you the back and forth and then the climax of the knockout or submission. We’ve seen some good ones over the years.

Here are the latest finishes in UFC history.

Demetrious Johnson, UFC 186, 4:59 of fifth round - Kyoji Horiguchi had his moments in the first round of the fight, but he struggled to deal with the second gear of Demetrious Johnson and looked like he was going to lose a one-sided decision. About five seconds left in the fight, Johnson was able to lock in a tight armbar and at risk of his arm breaking, Horiguchi was forced to tap with just one second left on the clock. Horiguchi is 13-1 since this fight.

Yair Rodriguez, UFC Fight Night 139, 4:59 of fifth round - Chan Sung Jung was going to win by decision if the fight went to the judges. Despite controlling most of the fight and being up on the scorecards, The Korean Zombie continued to be aggressive and press forward. Rodriguez ducked a left hand and came up with an elbow that connected on Sung Jung’s chin. While there’s some skill to it and perfect execution, it’s also part luck on Rodriguez’s part. Right place, right time kind of thing. One of the craziest finishes in MMA history.

Frankie Edgar, UFC Fight Night 57, 4:56 of fifth round - Frankie Edgar was beating up on Cub Swanson throughout the fight and was finishing the final 20 seconds with ground and pound. That’s when Swanson kind of relaxed his positioning and left an opening for Edgar to get under the chin and win via a neck crank. These two had a rematch at UFC Fight Night 128 and Edgar won in a one-sided decision.

Jairzinho Rozenstruik, UFC on ESPN 7, 4:56 of fifth round - Alistair Overeem was going to win a comfortable decision if the fight went to the judges. However, Rozenstruik picked up his aggressiveness in the last minute and started landing some power shots that gave him confidence. Rozenstruik then landed a right hand that split half his lip off his face. The ref had no choice but to stop his fight. It was easily one of the nastier cuts in MMA history.

Kamaru Usman, UFC 245, 4:10 of fifth round - Kamaru Usman and Colby Covington traded strikes for five rounds in what was a highly entertaining fight that had many questioning who was up on the scorecards. In the fifth round, Usman was getting the better of Covington and dropped him with a flurry of punches that he quickly finished with ground and pound. While Usman is known for his grappling and relentless ground game, he showed he can more than hold his own on his feet.

Demetrious Johnson, UFC on Fox 8, 3:43 of fifth round - Demetrious Johnson was in complete control of this fight against John Moraga, as he was looking for his second defense of the UFC Flyweight Championship. But Johnson is never satisfied with just a victory, he’s always pushing forward for the finish and leaving nothing to chance. Like his fight against Horiguchi, Johnson was scrambling on the canvas and eventually got that arm in a position to lock in the submission hold. This was the second time in Johnson’s career he won a fight via armbar.

Miesha Tate, UFC 196, 3:30 of fifth round - Tate and Holly Holm went back and fourth for nearly five rounds and who knows who would have won if it went to the judges. Tate was able to get a last minute takedown and lock in a rear-naked choke rather quickly. Holm, who was undefeated at the time, refused to tap, so she went unconscious and it resulted in a technical submission win for Tate, making her the UFC Women's Bantamweight Champion. Holm is 3-4 since this loss.