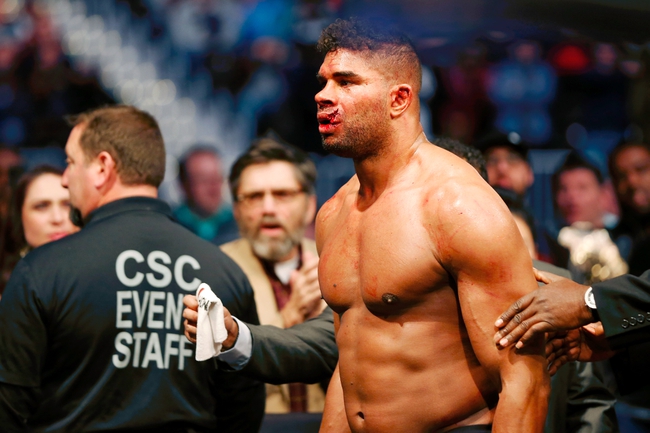 The Longest Knockouts In UFC History

Late knockouts in MMA are exciting, as right when you think the fight is going to a decision, somebody lands something vicious and the fight is over. While the sport continues to grow at a rapid rate, we’ve seen some exciting late knockouts already, some recent as well.

Here are the latest knockouts in UFC history.

1. Yair Rodriguez, UFC Fight Night 139, 4:59 of fifth round - Chan Sung Jung decided to continue pushing forward despite winning the fight, and he caught an elbow to the chin with one second to spare. Truly one of the craziest finishes the sport has ever seen and is one of the main reasons why fighters who are clearly winning should take a cautious approach with only a few seconds left.

2. Jairzinho Rozenstruik, UFC on ESPN 7, 4:56 of fifth round - Jairzinho Rozenstruik was also losing to Alistair Overeem, but he landed a monster right hand that nearly took his opponents lip off his face. This is one of the nastiest cuts the sport has seen, so proceed with caution if you’re the squeamish type.

3. Derrick Lewis, UFC 229, 4:49 of fifth round - Derrick Lewis was down in the scorecards, looked hurt multiple times throughout the fight and looked completely exhausted. That didn’t stop Lewis from catching Alexander Volkov with a right hand and finishing with ground and pound. This was also the fight when Lewis told Joe Rogan that his balls were hot during the interview.

4. Kamaru Usman, UFC 245, 4:10 of fifth round - This fight between Kamaru Usman and Colby Covington was a complete war and everybody seemed to have a different scorecard heading into the fifth round. Usman landed a combination that he was able to finish with ground and pound, and he proved to the rest of the division that he’s more than a grappler.

5. Cain Velasquez, UFC 166, 3:09 of fifth round - This was the third time Cain Velasquez and Junior Dos Santos fought, and it was another five round bloodbath. Velasquez was in control for majority of the fight and should have won had it gone to the judges, but he dropped Dos Santos on his head after they were in the clinch, and it was pretty much curtains after that. Velasquez landed an extra shot for good measure, but Dos Santos was covered up and wanted no parts of fighting after landing on his head.

6. Ricco Rodriguez, UFC 39, 3:04 of fifth round - Ricco Rodriguez got the biggest win of his career when he beat Hall of Famer Randy Couture with a late TKO with a submission to elbow. Rodriguez was losing on the scorecards, but he took control of the ground in the final round and became the first Puerto Rican to be crowned UFC Heavyweight Champion.

7. Stipe Miocic, UFC Fight Night 65, 2:47 of fifth round - Stipe Miocic bullied Mark Hunt in this fight, landing 361 total strikes to just 48 from his opponent. Miocic ended up finishing the fight after taking Hunts back on the canvas and just drilling his head over and over before the referee had no choice but to stop it. Hunt wasn’t putting up a fight and took shot after a shot. Complete domination from Miocic.