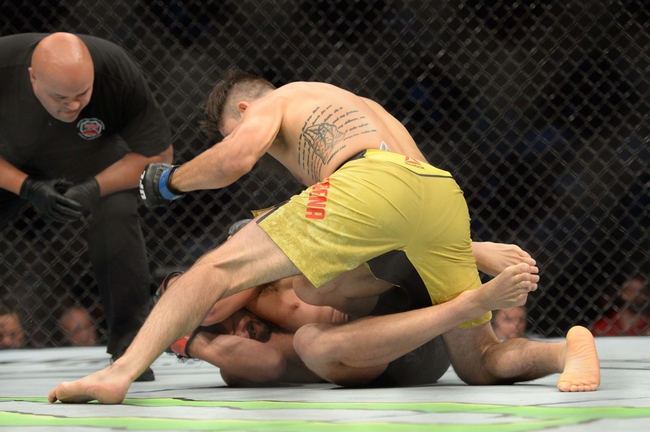 Carlos Condit enters this fight with a 30-13 record and has won 50 percent of his fights by knockout. Condit has lost each of his last five fights and is coming off a December (2018) loss to Michael Chiesa. Condit is averaging 3.56 significant strikes per minute with an accuracy percentage of 39 percent. Condit is averaging 0.58 takedowns with an accuracy percentage of 55 percent. Condit hasn’t been in the octagon in about a year and a half, and we haven’t seen him win a fight since beating Thiago Alves about five years ago at UFC Fight Night 67. Condit was supposed to fight at UFC on ESPN 7, but he was forced to pull out due to a detached retina. Bottom line is we don’t know what to expect from Condit when he steps in the octagon. When in good form, Condit is one of the better finishers in the sport, as only two of his 30 wins have come by decision and he has true one punch knockout power thanks to his boxing background. Condit also has a kickboxing background, is really athletic and has the stamina to still be effective in the later rounds despite losing each of his last four decisions. While he comes from a striking background and is more comfortable on his feet, Condit also has 13 submission victories and his grappling has improved over the years. Condit is a balanced, powerful fighter, it’s just about getting that confidence back and snapping out of this funk.

Jake Ellenberger enters this fight with a 31-15 record and has won 68 percent of his fights by knockout. Ellenberger has lost six of his last seven fights and is coming off an August (2018) loss to Bryan Barberena. Ellenberger is averaging 2.47 significant strikes per minute with an accuracy percentage of 39 percent. Ellenberger is averaging 2.04 takedowns with an accuracy percentage of 47 percent. Ellenberger is another fighter who has had issues finding his form, as he’s lost four straight fights and hasn’t won in the octagon since beating Matt Brown at UFC 201 nearly four years ago. Ellenberger has just three wins in the last seven years overall and has been finished in seven of his last eight losses. When in good form, Ellenberger is a heavy handed striker with raw knockout power, has a background in wrestling and has six career submission victories. Ellenberger is a balanced fighter who usually brings excitement to the octagon and is capable of ending things on his terms. Ellenberger is a purple belt in BJJ and has a deep wrestling background that includes being an assistant coach at the University of Nebraska-Omaha and helping the school win multiple national titles. Ellenberger knows his way around the canvas despite most of his wins coming by knockout.

These two fought at UFC Fight Night 19 over 10 years ago and Condit ended up winning a split decision despite Ellenberger landing the higher percentage of strikes and producing three takedowns. At the stage of their careers, it’s tough to back either of these fighters with confidence given their current forms. Condit has been the better finisher on the canvas, but Ellenberger is the better wrestler and should be more comfortable in this style of fight where no striking is involved. Remember, Ellenberger controlled much of the previous fight on the ground and even tried three submission attempts.

I’ll lean toward Ellenberger getting revenge in this rematch.