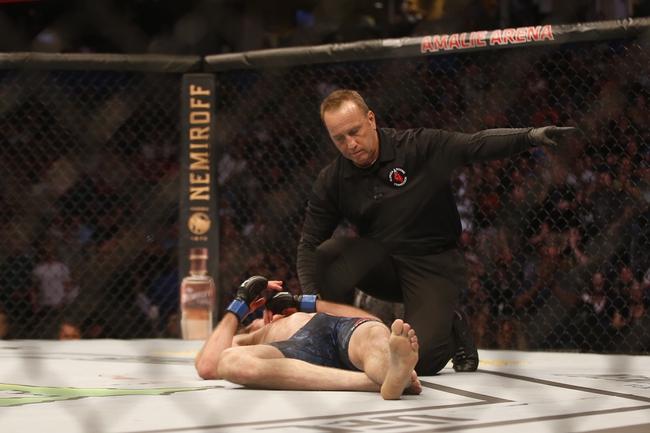 Kevin Casey enters this fight with a 9-6-2 record and has won 33 percent of his fights by knockout. Casey has won one of his last seven fights and is coming off an August (2017) loss to Chris Honeycutt. Casey is kind of in a must-win situation, as he hasn’t won an MMA fight since beating Ildemar Alcantara back in 2015 at UFC Fight Night 71. Casey was rebased from Bellator a couple of years ago and hasn’t even fought in nearly three years. There’s a lot of reason to question Casey right now and his ability to be effective and possibly save his fighting career. The good news is that Casey is a massive dude who is built like a linebacker and has extreme punching power and decent boxing skills. Casey is always a threat on the feet due to this striking power, but he’s also a threat in the clinch where he throws some powerful knees. Casey is also a black belt in BJJ and has won three fights via submission. The bad news is Casey has a questionable chin at best and a;l six of his career losses have come by knockout.

Craig Jones enters this fight as one of the more decorated grapplers in the world and has champed a variety of events over the years. Jones has a 40-14 grappling record with 34 of those victories coming by submission. A total of 10 of those 34 submission victories came by inside heel hook. Only three of Jones’ 14 losses came by submission, while six of them came by points. Jones is a black belt in BJJ, and he has submission victories over Chael Sonnen, Lachlan Giles, Muriel Santana and Leandro Lo on his resume. Jones is a four-time Pan-Pacific Champion and six-time Australian Champion. The bottom line is Jones is very accomplished on the canvas, and he’s a very fluid athlete who reverses positions well and usually finds a submission hold rather quickly, especially when on the bottom where he can find the heels of his opponent. Jones is known for his inside and outside heel hooks.

Casey should give himself a chance here considering there’s no striking in this fight, so he doesn’t have to worry about being knocked out again. In all seriousness, it’s tough to make a case for Casey given the last several fights we’ve seen of him and the fact he hasn’t fought in a while. I’m also not as confident with Casey on the canvas, as he can be a bit stiff at times. Jones and his ground game doesn’t need any more of an introduction, as this is what he does in his sleep.

Give me Jones by submission.