Who Has The Most Decision Bouts In UFC History? 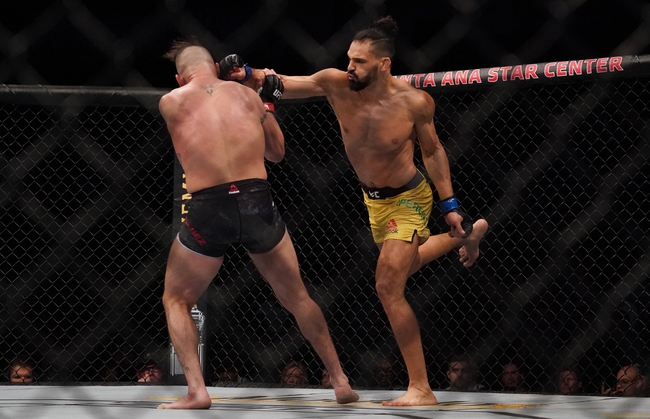 The Most Decision Bouts In UFC History

Decisions in MMA are often a mixed bag, as you can get a boring grappling fight with little action between the two fighters, or you can get a downright brawl where both fighters refuse to go down. Either way, there are some fighters in this sport who have a knack for consistently having their fights go to the judges.

Here are the fighters with the most decision bouts in UFC history.

Diego Sanchez, 18 - Diego Sanchez has seen 21 of his 42 fights end in decisions, and eight of his 12 career losses have gone to the judges. Sanchez has knockout power and a background in wrestling, so he’s balanced and has the ability to finish fights, but when his bouts aren’t ending in knockouts, he’s seeing hi fights go to the judges.

Gleison Tibau, 16 - Gleison Tibau has had 24 of his 49 career fights end in decisions, and he’s been on the winning side of 17 of those contests. Tibau won many controversial split decisions during his time in the UFC and even lasted three rounds with Khabib Nurmagomedov at UFC 148.

Jeremy Stephens, 16 - Ten of Jeremy Stephens’ last 15 fights have ended in decisions, including his most recent bout with Yair Rodriguez at UFC on ESPN 6 that earned fight of the night honors. Stephens is a tough dude who can take punishment and keep coming forward, but the downside is that he’s been on the losing side in 12 of his 19 career decisions.

Frankie Edgar, 15 - Frankie Edgar’s fights end in either knockouts or decisions, as only four of his 32 career fights have resulted in a submission. Edgar has given us some classic decision bouts, including his fight with Charles Oliveira at UFC 162 and his meeting with Jose Aldo at UFC 200 for the interim UFC Featherweight Championship. Edgar has been on the winning side in 12 of his 18 carer decisions.

Sam Stout, 14 - Before Sam Stout was knocked out three straight times and called it quits on his MMA career, he had a stretch where 12 of his 14 fights ended in decision. Stout had some brawl decision bouts such as his fight with Spencer Fisher at UFC on FX 4 and with Jeremy Stephens at UFC 113. Stout won 10 of his 16 career decisions.

Michael Bisping, 14 - There are some memorable decision fights in Michael Bisping’s career such as his fights with Yoshihiro Akiyama at UFC 120, Anderson Silva at UFC Fight Night 84 and Dan Henderson at UFC 204. When Bisping wasn’t knocking heads off, he was going to the judges, and he ended up winning 10 of his 14 decisions in his Hall of Fame career.