Who Has The Most Submission Victories In UFC History? 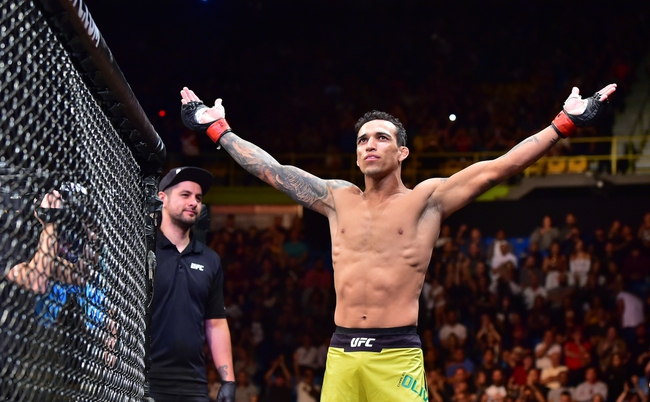 The Most Submission Victories In UFC History

Submission victories in MMA are one of the most exciting things in the sport, as it’s an art form to get the fight where you want it, gain position and lock in a hold while forcing the opponent to basically give up. You can win a fight by knockout with one lucky punch, but submission victories often take much more work and are probably more satisfying knowing you actually outfought and outsmarted the opponent. Get UFC Picks and MMA Predictions at Sports Chat Place.

Here are the fighters with the most submissions in UFC history.

1. Charles Oliveira, 14 - Nine of Charles Oliveira’s last 12 fights have ended in submission, and he just impressively submitted Kevin Lee at UFC Fight Night 170. With a third degree black belt in BJJ, Oliveira is a master on the canvas and it’s beautiful to watch him switch positions so effortlessly. Four of Oliveira’s 19 career submission wins have come by anaconda choke.

2. Demian Maia, 11 - Demian Maia has widely been considered one of the best ground fighters in the history of the UFC, and he has a deep background in submission wrestling. A fourth degree black belt in BJJ, five of Maia’s last eight wins have come by submission. Even at 42 years old, Maia is always a threat no matter the opponent because of his wrestling ability and experience.

3. Royce Gracie, 10 - Royce Gracie actually holds the UFC record for highest submissions per win percentage at 90.9 percent. The Gracie family is notorious for the development of BJJ and there’s a long line of submission artists who have come from this umbrella. Gracie is the first fighter in the UFC to submit via the rear-naked choke and the lapel choke.

4. Nate Diaz, 8 - Many know Nate Diaz for his powerful and aggressive striking along with his bleeding and toughness, but he actually has the fourth most submission attempts in UFC history. Diaz is a second degree black belt in BJJ and has that submission victory over Conor McGregor at UFC 196 that really took his career to another level. Diaz has always been a balanced fighter and shouldn’t be overlooked on the ground.

4. Jim Miller, 8 - No fighter in the history of the UFC has more submission attempts than Jim Miller, as he’s attempted 39 throughout his career. Each of Miller’s last three wins have ended via submission, and he’s earned a few bonuses for his work over the years, including his submission of the night over Oliveira at UFC 124. A black belt in BJJ and a deep wrestling background, Miller has 17 career submission victories.

4. Frank Mir, 8 - Eight of Frank Mir’s nine career submission victories have come under the UFC banner, and he’s actually the first fighter in the UFC to win fights via inside shoulder lock and toe hold. Mir won the heavyweight title over Tim Sylvia with an armbar and also beat Brock Lesnar with a kneebar.