Which Fighters Have The Most Significant Strikes In UFC History? 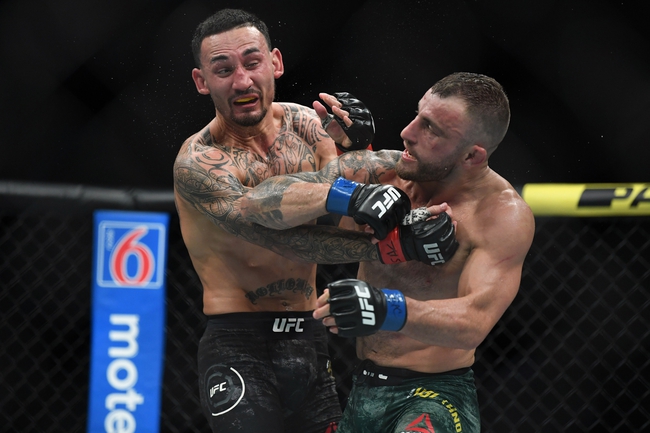 Fighters Who Have Landed The Most Significant Strikes

The most significant strikes landed in a fight usually tell you who is most polished and comfortable on the feet. These fighters can certainly hold their own on the canvas, but a lot of their best work has been done standing up where they unleash powerful shots to put their opponent away. Get UFC Picks and MMA Predictions at Sports Chat Place.

Here are the fighters with the significant strikes landed in UFC history.

Which Fighters Have Landed The Most Total Strikes In UFC History?

1. Max Holloway, 2,071 - Max Holloway has a background in kickboxing and 10 of his 21 victories have come by knockout. Against Brian Ortega in UFC 231, Holloway set a UFC record with most significant strikes in one fight with 290.

2. Joanna Jedrzejczyk, 1,711 - Joanna Jedrzejczyk doesn’t finish a lot of her fights, she just stands in the middle of the octagon and trades blow for blow, as we saw against Zhang Weili at UFC 248. Jedrzejczyk threw 225 significant strikes against Jessica Andrade, which is the most thrown in a UFC championship fight.

3. Frankie Edgar, 1,568 - Frankie Edgar started his MMA career with a wrestling and boxing background, and he has knockout wins over BJ Penn, Chad Mendes and Yair Rodriguez. Edgar also has an impressive knockout over Gray Maynard at UFC 136 to defend the lightweight championship.

4. Michael Bisping, 1,567 - Michael Bisping had four different fights where he landed more than 100 significant strikes and 17 of his 30 career wins came by knockout. Bisping entered MMA knocking people out and his kickboxing background helped him become a Hall of Famer in 2019.

5. Donald Cerrone, 1,535 - Donald Cerrone is a fighters fighter, never ducking an opponent and willing to fight the sports best on a ridiculous turnaround. Cerrone comes from a boxing and kickboxing background, and he doesn’t mind fighting the best strikers on their feet, even if it doesn’t play out well for him.

6. Jon Jones, 1,463 - Jon Jones averages 4.30 significant strikes per minute at a 57 accuracy percentage. Widely considered the best fighter to ever do it, Jones uses his distance to his advantage and brake his opponent down however he chooses.

7. Rafael Dos Anjos, 1,401 - Rafael Dos Anjos showed he has one punch knockout potential against Benson Henderson at UFC Fight Night 49 and George Sotiropoulos at UFC 132. Dos Anjos is also one of the best in the sport when it comes to leg kicks and those massive shots add up.

8. Nate Diaz, 1,367 - Nate Diaz is not only one of the most aggressive takedown artists in the sport, but he throws down with the best of them, bloody face and all. Diaz went blow for blow with Conor McGregor at UFC 202 and landed 153 significant strikes against Michael Johnson at UFC on Fox 17.

9. Georges St-Pierre, 1,313 - Georges St-Pierre saw 12 of his 28 fights end in decision, so he had lots of time to pile up his strikes total. St-Pierre topped 100 significant strikes in four of his last eight decisions.

The pick in this article is the opinion of the writer, not a Sports Chat Place site consensus.
Previous Pick
Who Has The Most Split Decision Victories In UFC History?
Next Pick
Ryan Bader vs. Vadim Nemkov - 5/9/20 Bellator 242 Pick, Odds, and Prediction