Which Fighters Have Landed The Most Total Strikes In UFC History? 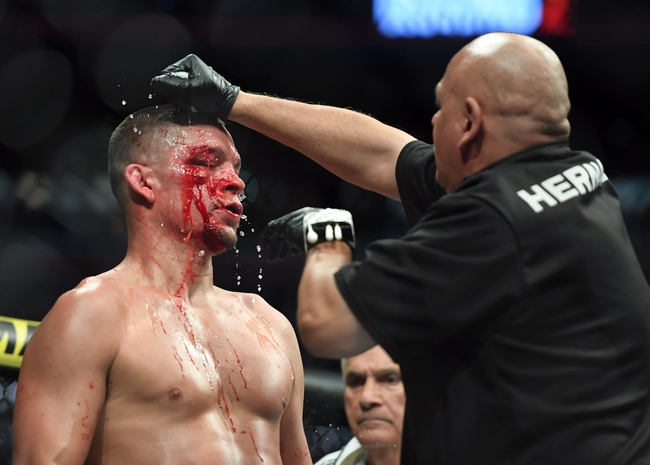 Fighters Who Have Landed The Most Total Strikes

In MMA, there’s significant strikes that are usually strikes from a distance and power strikes in the clinch. Total strikes includes everything landed, especially the shorter strikes in the clinch or on the ground. It’s a system that should probably be tweaked a bit, as a strike is a strike at the end of the day, but it is what it is at the moment. Get UFC Picks and MMA Predictions at Sports Chat Place.

Here are the fighters who have landed the most total strikes in UFC history.

Which Fighters Have The Most Significant Strikes In UFC History?

1. Georges St-Pierre, 2,591 - Georges St-Pierre was one of the more balanced fighters in the sport due to his deep training in pretty much everything, but he saw 12 of his 26 career fights go to decision, so he had a lot more time to land some shots. In his win over Josh Koscheck at UFC 124, St-Pierre landed 136 total strikes.

2. Nate Diaz, 2,256 - Nate Diaz is up there in pretty much every major stat in UFC history, as he’s held his own on the canvas and is known for his standup with his face all bloody. Diaz landed 205 total strikes in his win over Anthony Pettis at UFC 241 and hit Conor McGregor with 252 total strikes at UFC 202 in a classic fight.

3. Max Holloway, 2,247 - Max Holloway averages 6.6 significant strikes per minute, and he holds the UFC record for most total strikes in a single fight, as he hit Brian Ortega with 307 strikes at UFC 231. Very comfortable standing up and picking apart his opponent from a distance, Holloway is one of the better strikers in the history of UFC.

4. Frankie Edgar, 2,204 - Frankie Edgar comes from a boxing background and has seen 18 of his 32 total fights end in decisions, so he’s had a lot of rounds to pile up this strike total. Edgar hit Holloway with 96 total strikes in what was a competitive fight at UFC 240.

5. Jon Fitch, 2,185 - Jon Fitch saw a lot of decisions in his UFC career and his wrestling background gives him a lot of opportunities to land short ground strikes that land in the total strikes category. Fitch landed 176 total strikes against Erick Silva at UFC 153.

6. Rafael Dos Anjos, 1,994 - Rafael Dos Anjos throws some of the most devastating leg kicks in MMA history and has impressive ground and pound. In his fight against Robbie Lawler at UFC on Fox 26, Dos Anjos landed 219 total strikes.

7. Demetrious Johnson, 1,956 - Demetrious Johnson landed 54 precent of his significant strikes and had a lengthy UFC career to pile up this strike total. Johnson hit Ali Bagautinov with 164 total strikes in his win at UFC 174.

9. Michael Bisping, 1,935 - Michael Bisping fought in the UFC for over a decade and had some classic decisions where he piled up the strike total. In his win over Dan Henderson at UFC 204, Bisping landed 130 total strikes and 75 percent of hose shots were to the head.

10. BJ Penn, 1,890 - BJ Penn wasn’t the most accurate striker in the world and could be sloppy at times, but he fought a ton and got his shots in whether win or lose. In his win over Sean Sherk at UFC 84, Penn landed 130 total strikes before ending things with a flying knee.

The pick in this article is the opinion of the writer, not a Sports Chat Place site consensus.
Previous Pick
Ryan Bader vs. Vadim Nemkov - 5/9/20 Bellator 242 Pick, Odds, and Prediction
Next Pick
What's The Most PPV Buys In UFC History?