What's The Most PPV Buys In UFC History? 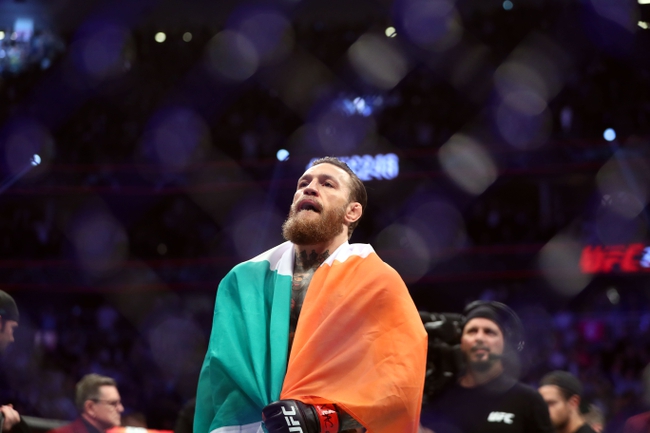 The UFC is one of the fastest growing sports in the world, as it went from a street fighting feel with little rules to becoming a structured multi-billion dollar company that sells out venues across the world and holds events almost weekly. Considering the UFC is still less than 30 years old, it’s fair to say we have yet to see the peak of what’s to come. Still, there have been some impressive PPV numbers already in the history of the UFC. Get UFC Picks and MMA Predictions at Sports Chat Place.

Here are the fight cards that have earned the highest PPV buys in UFC history.

1. UFC 229, 2.4 million PPV Buys - Fans got their moneys worth for this card, as it had a classic fight between Khabib Nurmagomedov and Conor McGregor that ended in a fourth round submission, a nasty, bloody fight between Tony Ferguson and Anthony Pettis and one of the latest knockouts in UFC history between Derrick Lewis and Alexander Volkov. A lot of must-watch fights on this card that you should go back to if you missed any. This card also set the record for the highest MMA attendance in Nevada at 2,0,034 people, and these PPV buys are the largest in MMA history regardless of company.

2. UFC 202, 1.6 million PPV Buys - This was the second fight between Conor McGregor and Nate Diaz, and it was a back and forth striking battle for five rounds that resulted in a controversial decision. Of course, the result of the first bout helped these numbers as people wanted to see what happened in the rematch. While that fight earned most of these buys, the fans enjoyed knockouts in each of the first four fights. Anthony Johnson knocked out Glover Teixeira with one shot, Donald Cerrone landed a head kick against Rick Story, Mike Perry put Hyun Gyu Lim to sleep and Tim Means got a second round knockout against Sabah Homasi. This was a highly entertaining card that was deserving of the money charged.

3. UFC 196, 1.317 million PPV Buys - This was the first bout between Conor McGregor and Nate Diaz, and it resulted in a shocking second round submission for the underdog. Miesha Tate got one of the latest submission wins in UFC history over champion Holly Holm and there was a highly competitive decision bout between Amanda Nunes and Valentina Shevchenko. The upsets in the co-main event and main event on this card make everything worth it and creates a memorable card that lived up to the hype.

4. UFC 100, 1.3 million PPV Buys - This was the card where Brock Lesnar continued to add to his hype train when he knocked out Frank Mir and defended his UFC Heavyweight Championship. Legend Georges St-Pierre dominated Thiago Alves for five rounds and Dan Henderson knocked out Michael Bisping with one shot in the second round. There was also a highly competitive bout between Yoshihiro Akiyama and Alan Belcher to set off this PPV card. These are impressive numbers when you consider how old this card is and the fact Jon Jones was fighting on the preliminary card of this event.

4. UFC 205, 1.3 million PPV Buys - There were three championship fights on the card, and Conor McGregor made his mark by knocking out Eddie Alvarez and becoming the first fighter to hold two titles simultaneously. Tyron Woodley beat Stephen Thompson in a decision to defend his belt and Joanna Jedrzejczyk defended her crown by dominating Karolina Kowalkiewicz through five rounds. We also got a flying knee knockout from Yoel Romero over Chris Weidman early in the third round. The magnitude of each fight made this a must-buy card and it was solid for the most part.

6. UFC 194, 1.2 million PPV Buys - Once again Conor McGregor proves he’s the cash cow in UFC, as he’s headlined five of the six biggest PPV purses in history. This card, McGregor knocked out Jose Aldo in 13 seconds, which is the fastest finish in UFC title history. Luke Rockhold knocked out Chris Weidman in the fourth round to become champion. Yoel Romero also won a highly competitive fight against Ronaldo Souza that’s worth watching. This card lived up to the hype even if the main event was over before you had a chance to blink.

The pick in this article is the opinion of the writer, not a Sports Chat Place site consensus.
Previous Pick
Which Fighters Have Landed The Most Total Strikes In UFC History?
Next Pick
Who Are The Winningest Fighters In UFC History?