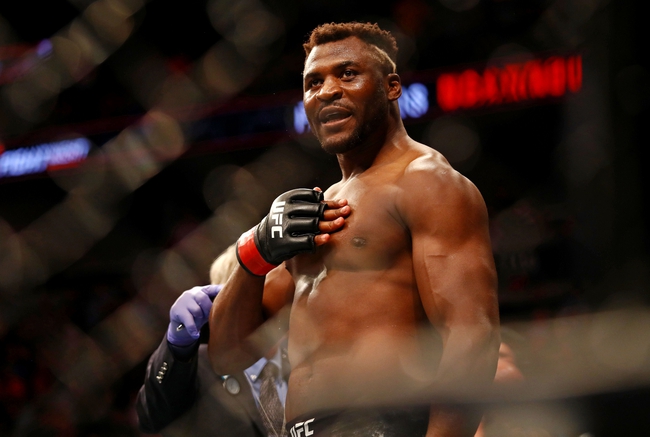 Francis Ngannou enters this fight with a 14-3 record and has won 69 percent of his fights by knockout. Ngannou has won 10 of his last 12 fights and is coming off a June win over Junior dos Santos. Ngannou is averaging 2.15 significant strikes per minute with an accuracy percentage of 37 percent. Ngannou is averaging zero takedowns with an accuracy percentage of zero percent. Ngannou is coming off another first round knockout, which has been the result of his last three fights. Like the Cain Velasquez fight, it wasn’t a devastating strike, but Ngannou landed just enough to drop his opponent and finish with ground and pound. Ngannou doesn’t need to land a violent shot to do the job given the overwhelming power in his hand. There’s no surprises with Ngannou, as the guy is one of the scariest standup strikers in the sport and wants a fight standing up where he can put his boxing background to work. Ngannou puts together his punches cleanly, throws accurate combinations and usually lands a strong overhand or a devastating uppercut that changes the whole fight. Ngannou is putting his opponent to sleep if he lands cleanly, it’s just that simple. Ngannou also showed some decent legwork in his last bout, so he’s more than just pure boxing from the stand up. The only hope is that Ngannou runs out of gas and that power fades, which is why conditioning has been his downfall over the course of his career.

Jairzinho Rozenstruik enters this fight with a 10-0 record and has won 90 percent of his fights by knockout. This will be Rozenstruik’s fifth fight since 2019 and he’s coming off a December win over Alistair Overeem. Rozenstruik is averaging 3.72 significant strikes per minute with an accuracy percentage of 46 percent. Rozenstruik is averaging zero takedowns with an accuracy percentage of zero percent. Rozenstruik looked like he was going to suffer his first loss, as he was getting controlled for majority of five rounds, but he landed a last minute strike that pretty much knocked the lip off of Overeem’s face. It was a powerful shot that put UFC fans on notice, but we can’t overlook that Rozenstruik looked overmatched for majority of the fight before that punch. Rozenstruik is an intriguing fighter at 32 years old who comes from a boxing and kickboxing background, and he has obvious clear KO power in either hand. Rozenstruik has to like his chances standing up, as he was highly successful at kickboxing with a 76-8 record, and he throws these hooks that can knock his opponents head off. The cut Rozenstruik gave Overeem on one strike was one of the more impressive things you’re going to see and it makes you think different of this guy who pretty much came out of nowhere.

Rozenstruik deserves more respect than he was getting previously, but I don’t understand how he shoots up the rankings after one punch and gets a fighter such as Ngannou next. Rozenstruik was going to lose that fight if it lasted a few more seconds, and he really didn’t beat anybody perviously. Ngannou has been considered the scariest fighter in this division for a while now and there’s really no reason to pick against him when going up against a lesser experienced fighter with a five-inch shower reach. Rozenstruik has more to prove before I give him a shot against a heavyweight of Ngannou’s caliber.

I’m siding with Ngannou all day.