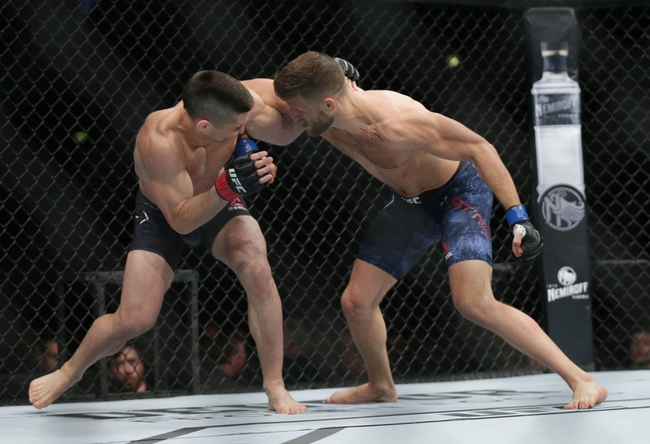 Jeremy Stephens and Calvin Kattar fight Saturday during UFC 249 at a location undecided.

Jeremy Stephens enters this fight with a 28-17 record and has won 68 percent of his fights by knockout. Stephens has split his last six fights and is coming off an October loss to Yair Rodriguez. Stephens is averaging 3.09 significant strikes per minute with an accuracy percentage of 40 percent. Stephens is averaging 1.18 takedowns with an accuracy percentage of 38 percent. Stephens may have suffered another loss, but he was highly competitive at UFC on ESPN 6, a fight that was back and forth and earned fight of the night honors. It’s a positive step in the right direction, as Stephens is still looking for his first victory since UFC on Fox 28. Stephens is an aggressive fighter who throws a lot of strikes and can take a beating when he gets into these brawl style fights. Stephens has only been knocked out twice in his career and is fresh off a contest where he ate 136 total strikes. Stephens has very heavy hands and can end things quickly, and 10 of his 19 career knockouts have ended in the first round. Stephens is also a good grappler and has solid success with takedowns, but he does a lot of his best work on his feet where he can unload on his opponent.

Calvin Kattar enters this fight with a 20-4 record and has won 45 percent of his fights by knockout. Kattar has split his last four fights and is coming off a November loss to Zabit Magomedsharipov. Kattar is averaging 5.12 significant strikes per minute with an accuracy percentage of 41 percent. Kattar is averaging 0.47 takedowns with an accuracy percentage of 33 percent. Kattar is coming off a tough loss at UFC Fight Night 163, as you could easily make a case he was robbed considering he landed more strikes and was about just as accurate in terms of percentage. Kattar now has to put things behind him and avoid back-to-back losses for the first time in his career. Kattar has a high school wrestling background and should some of his submission game earlier in his career, but he’s somebody who appears much more comfortable on his feet and simply unloads bombs. Kattar is polished with his boxing, as he sets his punches up well and throws with a purpose, and he has the power to end things with one shot. Don’t let the fact nine of Kattar’s last 11 fights have gone the distance, he throws bombs. Kattar also stuffs takedowns well, so he usually gets the fight where he wants it.

Stephens may be going through a cold stretch and oddsmakers are clearly down on him, but his striking ability and toughness make him tough to count out. Stephens can take a punch and keep coming forward and fighters like that have value in the underdog role. With that said, this is a comfortable fight for Kattar given his boxing skills and the fact he’s going to get this fight where he wants it. Kattar is sharper with his hands and has the power to drop Stephens if he wants to let his aggressiveness get the best of him.

I like Kattar to win this fight, and I’d take him by knockout to lower the expensive ML price.