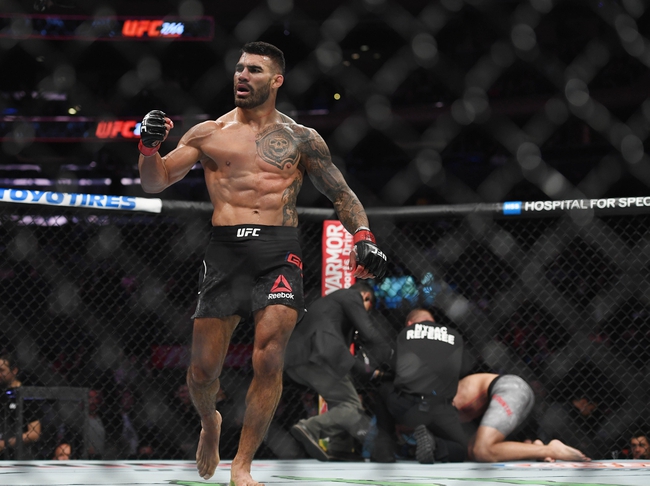 Lyman Good enters this fight with a 21-5 record and has won 52 percent of his fights by knockout. Good has won five of his last seven fights and is coming off a November win over Chance Rencountre. Good is averaging 5.32 significant strikes per minute with an accuracy percentage of 49 percent. Good is averaging 0.38 takedowns with an accuracy percentage of 100 percent. Good is coming off a dominating performance where he landed 50 percent of his strikes and produced a third round knockout. It was an attention grabbing victory at UFC 244 and was maybe the spark Good needed to kind of get back on track after losses in two of his last four fights. There’s not a whole lot of surprises with Good, as he wants to stay on his feet and throw bombs, and he’s bloodied a lot of faces up to this point. Good has a strong right hand and he throws a mean uppercut in the clinch. Good is also a good athlete who jumps on his opponents quickly and can unleash some powerful ground and pound. Good has some grappling skills and has improved his kickboxing as well, but its the power in his hands that butter his bread.

Belal Muhammad enters this fight with a 16-3 record and has won 69 percent of his fights by decision. Muhammad has won six of his last seven fights and is coming off a September win over Takashi Sato. Muhammad is averaging 4.37 significant strikes per minute with an accuracy percentage of 41 percent. Muhammad is averaging 2.15 takedowns with an accuracy percentage of 31 percent. Muhammad is coming off a third round submission victory that earned him performance of the night at UFC 242. It’s the second time Muhammad has earned a performance bonus, and he’s now 7-3 under the UFC banner. Muhammad has proven to be a balanced fighter who lands a great deal of strikes on his feet, but he’s also a successful takedown artist with a great gas tank that’s allowed him to win 11 of his 13 career decisions. Muhammad usually always gets the fight where he wants and it, and he does a great job of controlling the pace and not allowing his opponent to dictate much. At 31 years old, Muhammad has really settled in and is starting to make a name in the welterweight division.

Muhammad should be the favorite given that he has more ways to win the fight, he’s more comfortable on the canvas and he’s kind of found himself over these last few fights, making him much more confident. However, we’re getting Good, a powerful, powerful striker and somebody who is good at stuffing takedowns at plus money. Good has the longer reach, you could argue he’s the better athlete and he just needs to land one shot that gets Muhammad’s attention. This seems like a good spot to get behind the American Cyborg.

Give me Good in the underdog role.