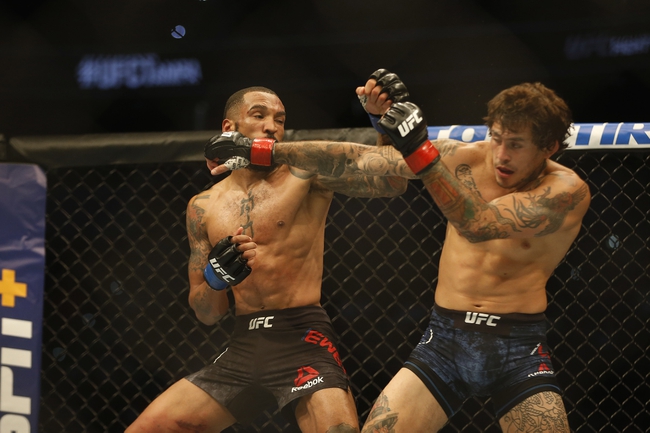 Marlon Vera and Ray Borg fight Saturday during UFC 249 at a location undecided.

Marlon Vera enters this fight with a 15-5-1 record and is winning 53 percent of his fights by submission. Vera has won each of his last five fights and is coming off an October win over Andre Ewell. Vera is averaging 3.43 significant strikes per minute with an accuracy percentage of 47 percent. Vera is averaging 0.76 takedowns with an accuracy percentage of 38 percent. Vera is enjoying the best stretch of his career and is coming off an impressive knockout that earned him performance of the night honors at UFC Fight Night 161. Vera has finished each of his last seven victories and has a chance to continue making noise at 27 years old in the bantamweight division. Vera is an athletic, jumpy fighter who is tough to get comfortable against on the feet and he throws compact strikes and leg kicks with some pop behind them. Vera is also a black belt in BJJ, so he knows his way around the canvas, and he’s never been finished in his career despite the five losses. Vera is an exciting fighter with a polished skill set and has a chance to seriously climb these rankings if he stays on this track he’s been on the last couple years.

Ray Borg enters this fight with a 13-4 record and is winning 46 percent of his fights by submission. Borg has won four of his last six fights and is coming off a February win over Rogerio Bontorin. Borg is averaging 1.36 significant strikes per minute with an accuracy percentage of 52 percent. Borg is averaging 4.26 takedowns with an accuracy percentage of 51 percent. Borg is coming off a solid victory where he controlled his opponent for three rounds, but he’s missed weight in four of his last eight fights, so it’s fair to question his professionalism at this stage of his career. Borg now looks to win three straight fights for the first time since 2014-15. Borg is a smooth fighter who is stronger than he looks and usually gets the fight on the ground where he wants it. Borg has a strong takedown percentage and he usually controls top position where he has an effective ground and pound. Borg scrambles well, can reverse position quickly and has six submission victories on his resume. The only real concern is that this is a quick turnaround for Borg, especially when you throw in the fact fighters aren’t going through a proper training camp these days.

This has a chance to be one of the better fights on the card, as these are two great athletes who usually get the fight where they want it and have finishing ability. The problem is we’re getting the more balanced fighter in Vera at plus money. Vera can not only hold his own on the ground and has never been finished, but he’s the much stronger striker on his feet and can end things there at any moment. Vera also isn’t the easiest fighter to takedown with a 68 percent takedown defense, and he’ll cruise in this bout if its three rounds of standing up.

Vera and plus money is one of the better bets on this entire card.

The pick in this article is the opinion of the writer, not a Sports Chat Place site consensus.
Previous Pick
Who Are The Winningest Fighters In UFC History?
Next Pick
Niko Price vs. Vicente Luque - 5/9/20 UFC 249 Pick, Odds, and Prediction