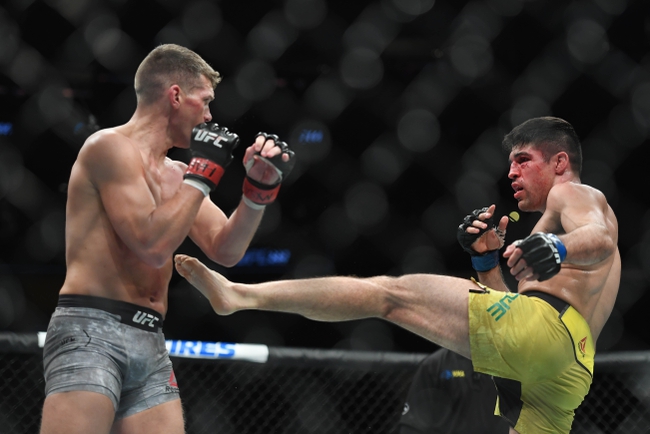 Vicente Luque enters this fight with a 17-7-1 record and has won 53 percent of his fights by knockout. Luque has won 10 of his last 12 fights and is coming off a November loss against Stephen Thompson. Luque is averaging 5.18 significant strikes per minute with an accuracy percentage of 53 percent. Luque is averaging 0.82 takedowns with an accuracy percentage of 50 percent. Luque is coming off a competitive fight that he was on the losing side of but it earned fight of the night honors at UFC 244. Luque has earned a fight of the night bonus in three of his last four bouts. Luque now hopes to avoid back-to-back losses for the first time in his career. Luque is a standup striker who doesn’t stop throwing and has true KO power, and four of his last five wins have been finishes via punches. Luque has some of the cleanest boxing technique in the sport and attacks the head at a high percentage, spending little time working the body or mixing in leg kicks. Luque is simply coming in to put guys to sleep and he has a high success rate when he gets the style of fight he wants. Luque does have six submission wins and is a purple belt in Luta Livre, so he can hold his own on the ground, but he’s most comfortable where he can let his hands go and it’s led to some downright brawls with good replay value.

Niko Price enters this fight with a 14-3 record and has won 69 percent of his fights by knockout. Price has won four of his last six fights and is coming off an October win over James Vick. Price is averaging 3.06 significant strikes per minute with an accuracy percentage of 34 percent. Price is averaging 1.08 takedowns with an accuracy percentage of 23 percent. Price is fresh off a highly impressive finish where he landed a kick from on his back, knocking his opponent out cold and earning performance of the night honors at UFC Fight Night 161. Price has now produced knockouts in each of his last three wins and has earned performance of the night bonuses in all three of those bouts. Price has a background in Brazilian jiu-jitsu, and he’s effective with his strikes standing up, in the clinch and on the ground. Price isn’t the most effective striker in terms of accuracy, but he’s got some pop when he does land and has this wild, aggressive style that can really overwhelm his opponent. Price isn’t the most technically sound or most disciplined fighter in the division, but his career has shown he only needs to land that one shot and he’s going to have his chances due to his aggressiveness.

These two fought a couple years ago at UFC Fight Night 119 and Luque won by submission in the second round. In that fight, Luque landed 61 significant strikes at 53 percent while Price landed 25 significant strikes at 25 percent. Price is a gamer who is going to give himself a chance due to his toughness and at times wild style, so the plus money is worth consideration. However, Luque is simply the better, more balanced fighter with much better technique and more raw power in his hands. Luque is the better fighter no matter how you slice it and it’s tough to bet against him as long as the price is reasonable.

I’ll take Luque by finish to lower the ML price.