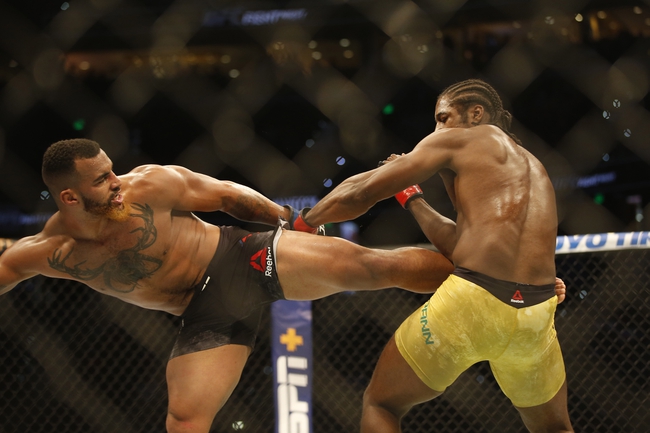 Sam Alvey and Ryan Spann fight Saturday during UFC 249 at a location undecided.

Sam Alvey enters this fight with a 33-13 record and has won 58 percent of his fights by knockout. Alvey has lost five of his last eight fights and is coming off a July loss to Klidson Abreu. Alvey is averaging 3.0.5 significant strikes per minute with an accuracy percentage of 44 percent. Alvey is averaging 0.09 takedowns with an accuracy percentage of 16 percent. Alvey is kind of in a must win situation to snap a three-fight losing streak and he’s been knocked out in two of those three losses. It wasn’t that long ago when Alvey was sitting pretty with a 31-9 record and fresh off a big win over the legendary Rashad Evans. Alvey is a well conditioned fighter who has won 11 of his 20 career decisions, and he has a strong wrestling background that goes back to his high school days. Alvey has a strong takedown defense of 82 percent and has been submitted just once in his career. Alvey is also a polished striker who has pop in both hands and has knocked dudes clean out, as we saw against Marcin Prachnio and Cezar Ferreira. Alvey is also a purple belt in BJJ, so he has some balance to his attack.

Ryan Spann enters this fight with a 17-5 record and has won 65 percent of his fights by submission. Spann has won seven straight fights and is coming off an October win over Devin Clark. Spann is averaging 3.2.6 significant strikes per minute with an accuracy percentage of 43 percent. Spann is averaging 0.60 takedowns with an accuracy percentage of 33 percent. Spann is on quite a roll right now with seven straight wins, and you have to go back to the Dana White's Contender Series 3 for his last loss. Spann is 3-0 under the UFC banner and has finished 11 of his last 12 victories. Spann is quite an athlete who throws powerful strikes and strong knees in the clinch, but he’s most effective on the canvas where he gains top position and finds a chokehold. Spann has won seven of his 11 submissions with the guillotine choke. Spann is also more than comfortable with his stand up where he can end things with one shot and throws clean combinations once he gets his timing down.

Alvey is a desperate fighter who doesn’t get finished and has the ability to end things on his feet, which makes this price worth considering. However, Spann is on such a role he’s damn near impossible to bet against. Spann is not only the younger and more balanced fighter in this spot, but he’s somebody who could be fighting for a title shot soon if he stays on this track. I’m not stepping in front of Spann right now.

Give me Superman for the win and by finish to lower the expensive ML price.

The pick in this article is the opinion of the writer, not a Sports Chat Place site consensus.
Previous Pick
Who Are The Winningest Fighters In UFC History?
Next Pick
Niko Price vs. Vicente Luque - 5/9/20 UFC 249 Pick, Odds, and Prediction