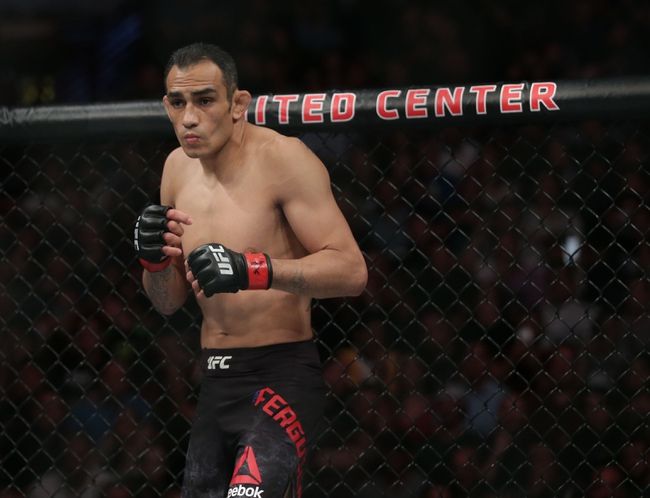 Justin Gaethje enters this fight with a 21-2 record and has won 85 percent of his fights by knockout. Gaethje has won 10 of his last 12 fights and is coming off a September win over Donald Cerrone. Gaethje is averaging 8.57 significant strikes per minute with an accuracy percentage of 55 percent. Gaethje is averaging zero takedowns with an accuracy percentage of zero percent. Gaethje is coming off his third straight first round knockout and has really put himself in the conversation for the best lightweight in the world. Against Cowboy, Gaethje landed 40 significant strikes at a percentage of 65 percent. Gaethje has earned performance bonuses in all six of his UFC fights. Gaethje has shown throughout his career that the striking power and the chin is there for him to hold his own with anybody standing up and he’s clearly most comfortable on his feet. Gaethje can give and take a beating, and he loves coming forward with pressure, making his opponent uncomfortable and forcing them to counter if they want to stay in the fight. However, Gaethje comes from a wrestling background and has a trainer who works relentlessly on technique, so at some point you’d think his ground game would come into play. At this point, Gaethje seems to be 100 percent dedicated to his standup and wants to head hunt.

Tony Ferguson enters this fight with a 25-3 record and has won 48 percent of his fights by knockout. Ferguson has won each of his last 12 fights and is coming off a June win over Donald Cerrone. Ferguson is averaging 5.81 significant strikes per minute with an accuracy percentage of 45 percent. Ferguson is averaging 0.56 takedowns with an accuracy percentage of 42 percent. Ferguson is coming off a dominating two rounds against Cowboy where the doctor had to stop the fight due to him blowing a broken nose that caused his eye to close shut. Ferguson earned fight of the night honors, and he has now earned performance bonuses in seven of his last eight fights overall. Ferguson is simply a savage in the octagon with a high work rate and ridiculous cardio that allows him to keep pushing with the same pace in each round. Ferguson has a reputation for beating up fighters and leaving them in a bloody mess. While his striking is elite level, Ferguson is all tough to takedown and he has a deep background in wrestling and BJJ that allows him to hold his own on the canvas if needed. Ferguson was a champion high school and college wrestler, and he’s very comfortable on his back where he’s no stranger to powerful strikes and can change position very quickly.

It's going to be interesting how both fighters handle this, as Gaethje wasn't on this card two weeks before the showdown, while Ferguson was scheduled to fight Khabib Nurmagomedov and now adjusts to a completely different skill set. Gaethje is always worth a look as an underdog given that his pressure and power stand up goes toe to toe with anybody in the sport and he can end things at any moment. With that said, this should be an easier opponent in terms of style, as Ferguson doesn't have to worry about stuffing takedowns and fighting from his back. Ferguson is going to get a similar fight that he had against Donald Cerrone and Anthony Pettis, two bouts where he thrived.

I like Ferguson to get the win and keep the pressure on Khabib to fight for the real title.