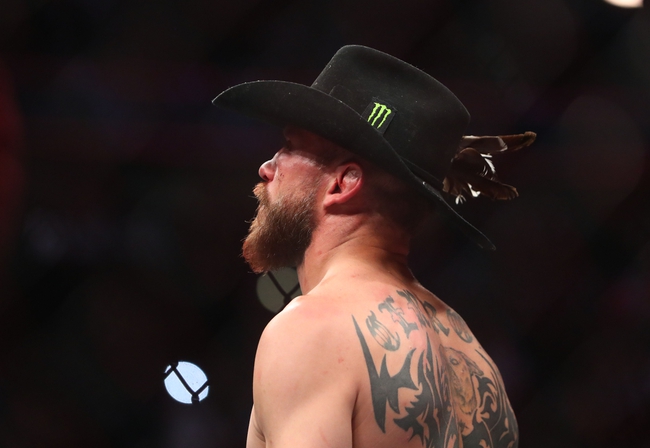 Donald Cerrone enters this fight with a 36-14 record and has won 47 percent of his fights by submission. Cerrone has split his last eight fights and is coming off a January loss to Conor McGregor. Cerrone is averaging 4.33 significant strikes per minute with an accuracy percentage of 46 percent. Cerrone is averaging 1.21 takedowns with an accuracy percentage of 36 percent. Cerrone is riding a three-fight losing streak and has gotten knocked out in all three losses. You have to question if the constant quick turnarounds are starting to catch up to Cerrone, as this will be his sixth fight since 2019 and already his second fight this year. At 37 years old and with 50 pro fights under his belt, some rest would probably benefit Cerrone greatly. Either way, Cerrone is a versatile fighter who is a well decorated kick boxer, has a deep background in Muay Thai and is comfortable on the canvas to the point he has 17 career submission victories. A total of 27 of Cerrone’s 36 victories have come by some sort of stoppage and he’s had just one decision victory since UFC 187. A polished wrestler who almost always has the edge on the canvas, Cerrone closes range well with those leg kicks and usually gets the fight where he wants it. A tough fighter who never backs down from the competition, Cerrone’s work rate and willingness to take on whomever is why he’s one of the more popular fighters in the sport.

Anthony Pettis enters this fight with a 22-10 record and has won 50 percent of his fights by knockout. Pettis has lost five of his last eight fights and is coming off a January loss to Carlos Diego Ferreira. Pettis is averaging 2.97 significant strikes per minute with an accuracy percentage of 46 percent. Pettis is averaging 0.67 takedowns with an accuracy percentage of 54 percent. Pettis has experienced back-to-back losses after he was dominated in his return to lightweight and lost via rear-naked choke in the second round. Right when Pettis looks like he’s found his form and is back on the right side with a knockout win over Wonderboy, he finds himself in need of another feel good victory. When Pettis is in good form, he’s super creative, sometimes wild and just finds ways to win that may not exactly be traditional. Whether it’s a Superman punch, a kick after running on the cage or a triangle choke, it often feels like Pettis is just winging it in the octagon and uses everything to his advantage. The unpredictability and ability to finish fights out of nowhere is what makes Pettis so dangerous. Pettis is a black belt in Taekwondo and BJJ, so he’s comfortable anywhere and he’s never out of a fight until it’s officially over. Don’t count out Pettis despite the mixed bag of results.

Pettis won the first bout against Cerrone more than seven years ago at UFC on Fox 6 when he landed a hard kick to the body in the first round and ended things with Cowboy dropping to the canvas. Obviously things have changed since then, as both fighters are far more experienced and battle tested, and they’ve both gone in different directions in a way. While Cerrone has gotten beat up in his last three fights, he’s clearly been the more consistent fighter of the two and has been very kind to bettors in the underdog role over the years. You’re never quite sure which fighter you’re going to get with Pettis and he could get hurt if he decides to stand with Cowboy in this bout.

Cerrone looks like he could use some time off and his last results are why he’s the underdog here, but I’ll still back him along with the plus money.