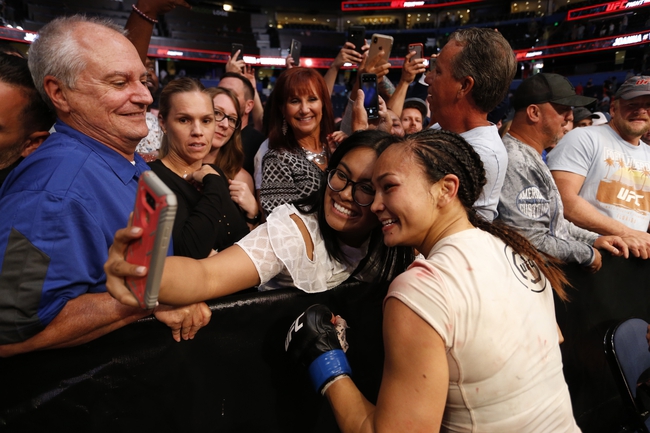 Michelle Waterson enters this fight with a 17-7 record and has won 53 percent of her fights by submission. Waterson has split her last six fights and is coming off an October loss to Joanna Jedrzejczyk. Waterson is averaging 3.35 significant strikes per minute with an accuracy percentage of 53 percent. Waterson is averaging 1.88 takedowns with an accuracy percentage of 50 percent. Waterson had her momentum end rather quickly, as she was pieced up for five rounds and really outclassed from start to finish. Waterson now hopes to avoid back-to-back losses for the second time in her career and kind of right the ship given that she was building toward a potential title shot. Waterson is a super athletic fighter with a black belt in karate and a background in kickboxing, so leg kicks are a huge part of her game and she’s extremely quick and accurate. Waterson doesn’t have a lot of power in her hands, but she’s very flexible and can get her leg up quickly to change the outlook of the fight in a hurry. Waterson is also highly successful with her takedown attempts and has nine career submission victories, so she’s a very balanced fighter who loves finding an armbar hold to finish a fight. This will be Waterson’s second career fight in Florida.

Carla Esparza enters this fight with a 15-6 record and has won 53 percent of her fights by decision. Esparza has won five of her last eight fights and is coming off a September win over Alexa Grasso. Esparza is averaging 2.22 significant strikes per minute with an accuracy percentage of 40 percent. Esparza is averaging 3.53 takedowns with an accuracy percentage of 36 percent. Esparza is coming off a tight majority decision win at UFC Fight Night 159 where it earned fight of the night honors and was early identical in terms of total strikes landed. Esparza was the more accurate striker, so she got the nod, and she now looks for three straight wins for the first time since 2012-14. Esparza has a background in wrestling and Brazilian Jiu-jitsu, so she’s often looking for the takedown where she can unleash effective ground and pound on the canvas or throw elbows and knees in the clinch. Esparza lands 29 percent of her significant strikes on the ground. When Esparza is able to get her hands on her opponent, she likes her chances to control the fight and eventually come out victorious. Esparza has won seven of her last nine fights that have made it to the judges. This will be Esparza’s fifth career fight in Florida.

It’s fair to see why Esparza is the favorite here, as she has a serious edge in the clinch and on the ground, and she can control Waterson for much of the fight and win in decision like she has most of her recent bouts. However, Waterson has improved her game these last couple of years and is far more confident than she’s been in the past. If Waterson can keep this fight on her feet and stay not allow Esparza to get her hands on her and muck things up, she has to like her chances. Waterson has also been kind to us in past fights in the underdog role, so there’s betting value with her in these spots.

I’ll take Waterson for another upset.