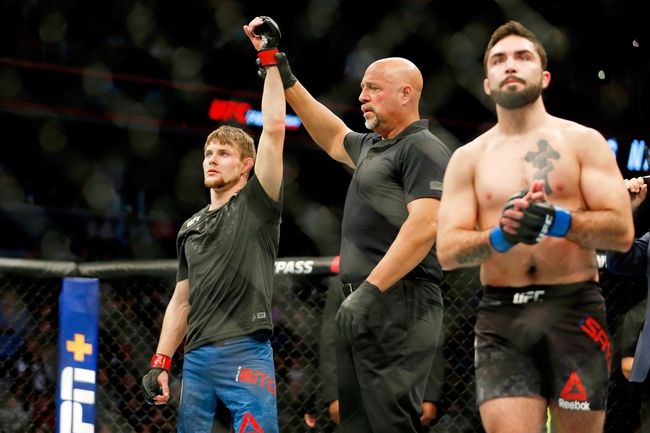 Bryce Mitchell enters this fight with a 12-0 record and has won 75 percent of his fights by submission. This will be Mitchell’s third fight since 2019, and he’s coming off a December win over Matt Sayles. Mitchell is averaging 1.83 significant strikes per minute with an accuracy percentage of 49 percent. Mitchell is averaging 1.50 takedowns with an accuracy percentage of 23 percent. Mitchell has yet to lose a fight since making his pro debut in 2015, and he’s coming off a performance of the night at UFC on ESPN 7 where he also was rewarded with the submission of the year thanks to a twister in the first round. Mitchell has seen three of his last four fights end in decision, but he’s most known for his ground game and finishing ability, and he has a brown belt in BJJ. Mitchell goes for the takedown as soon as an opening creates and he doesn’t let go once he gets his hands on his opponent. It also can’t be overlooked that Mitchell has great footwork standing up and can hold his own from a striking standpoint if needed. This will be Mitchell’s first career fight in Florida.

Charles Rosa enters this fight with a 12-3 record and has won 67 percent of his fights by submission. Rosa has split his last six fights and is coming off an October win over Manny Bermudez. Rosa is averaging 3.85 significant strikes per minute with an accuracy percentage of 36 percent. Rosa is averaging 2.93 takedowns with an accuracy percentage of 34 percent. Rosa is coming off a first round submission victory of his own that earned performance of the night honors at UFC on ESPN 6. Rosa now looks for back-to-back wins for the first time since 2014 when he was fighting in the CES MMA. Rosa comes from a deep boxing background and started early in karate, so he’s at his best on his feet where he can unleash his striking and powerful leg kicks. Rosa is a black belt in BJJ and six of his last eight victories have come by submission. Rosa has become quite a balanced fighter who is comfortable anywhere the fight goes, and he now needs to start stringing wins together given that he’s not getting any younger approaching 34 years old. This will be Rosa’s fourth career fight in Florida, the state he fights out of.

Rosa is a live dog in this fight given that he’s polished enough on the canvas to hold his own with Mitchell, and he’d have the edge standing up given the deeper and more accomplished background in BJJ. However, Mitchell is a rising star at 25 years old and seems to be getting better and more confident every time he takes the octagon. Mitchell is also good enough standing up to where it doesn’t concern me if he has to pick his spots in this bout.

Keep a close eye on Mitchell, as he’s somebody who could make serious noise in a year or two. Mitchell and the reasonable juice is the play here.