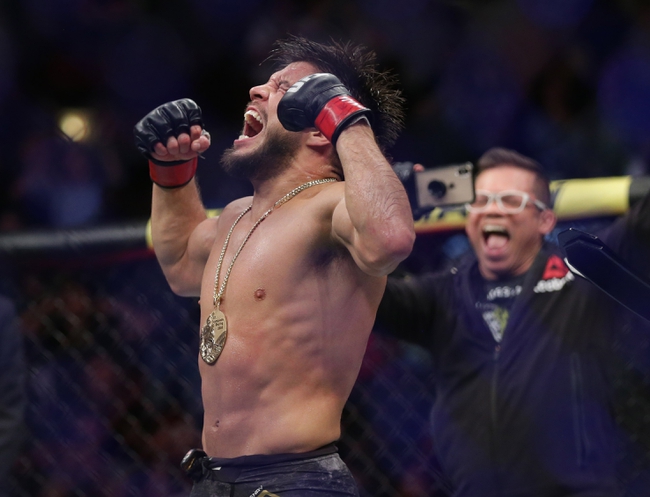 Dominick Cruz enters this fight with a 22-2 record and has won 64 percent of his fights by decision. Cruz has won 13 of his last 14 fights and is coming off a December (2016) loss to Cody Garbrandt. Cruz is averaging 3.53 significant strikes per minute with an accuracy percentage of 31 percent. Cruz is averaging 3.17 takedowns with an accuracy percentage of 50 percent. Cruz watched his 13-fight winning streak come to an end at UFC 207 and he’s dealt with nothing but injuries ever since. Cruz has had two fights canceled due to shoulder injuries or a broken arm, and now who knows what he’s going to look like after over two and a half years outside of the octagon. Cruz looks to avoid back-to-back losses for the first time in his career. Cruz relies heavily on his agility and striking game, and he has an impressive gas tank that allows him to be effective through the whole bout. Cruz has seen 11 of his last 13 fights go the distance, and he’s been on the winning side in 13 of his 14 career decisions. Cruz has a background in wrestling, but his stand up is where he butters his bread and his ability to get in and out quickly is some of the best in the sport.

Henry Cejudo enters this fight with a 15-2 record and has won 53 percent of his fights by decision. Cejudo has won his last five fights and is coming off a June win over Marlon Moraes. Cejudo is averaging 3.82 significant strikes per minute with an accuracy percentage of 44 percent. Cejudo is averaging 2.16 takedowns with an accuracy percentage of 35 percent. Cejudo is coming off another impressive performance that he finished in a third round knockout and showed his toughness throughout the victory. Cejudo has now produced knockouts in three of his last five victories. Cejudo is arguably the most accomplished wrestler in the sport, as he has several gold medals in freestyle wrestling and is usually always in control of a fight on the canvas. While wrestling is his background, Cejudo is also a much improved striker, which he’s showing lately and his ground and pound can’t be overlooked. Cejudo has become a much more balanced fighter over the years and his conditioning remains on point for somebody who is so stocky and has a massive upper body.

Dominick Cruz hasn't been in the octagon in forever and I hate getting behind fighters who aren't active, as I have no clue what I'm getting in terms of form. Cejudo is enjoying one of the better stretches of his career and is downright tough to bet against when you see his striking lately to go with his wrestling. This is a tough fight for Cruz given the long layoff and I'm not running to the window to back him even with the big plus money. Cejudo should be successful with his takedowns and control this fight for the most part. I'll lay the juice with Cejudo, but there's much better value out there on this card.