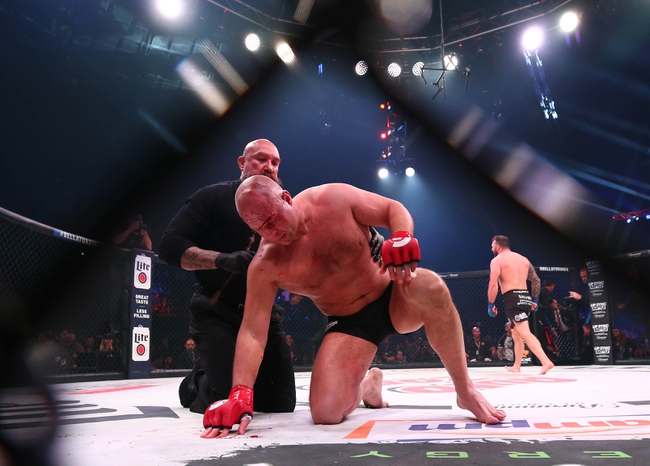 Ryan Bader and Vadim Nemkov fight Saturday during Bellator 242 at the SAP Center.

Ryan Bader enters this fight with a 27-5 record and has won 44 percent of her fights by knockout. Bader has won seven of his last eight fights and is coming off a September no contest against Cheick Kongo. Bader is coming off a fight that didn’t complete four minutes before it was considered a no contest due to an accidental eye poke. Bader hasn’t fought a full round since his Bellator 207 victory over Matt Mitrione. Bader comes from a deep wrestling background and can certainly hold his own on the canvas, but he seems to shy away from the ground game and focus mainly on his striking. Bader throws powerful strikes and is quite athletic for a big guy, as he’ll attempt a flying knee or a high kick once in a while. Bader has good footwork and legit one punch knockout power, and he’ll unleash nasty ground and pound the second his opponent falls to the ground. Five of Bader’s last seven victories have come by knockout and it’s clear he’s put his wrestling experience in the revere mirror for now.

Vadim Nemkov enters this fight with a 11-2 record and has won 73 percent of her fights by knockout. Nemkov has won each of his last six fights and is coming off an October win over Rafael Carvalho. Nemkov is coming off his second career submission victory and still hasn’t lost since his 2016 bout against Karl Albrektsson in RIZIN FF 1. Nemkov is 4-0 under the Bellator banner and gets the first title shot of his MMA career. Nemkov comes from a Sambo background that includes gold medals in the World Championships, and he has violent takedowns where he controls the fight as soon as it goes to the canvas. Nemkov has had more success as a striker in his MMA career, as he has crisp boxing where he follows up his jab well and has a powerful right hand with knockout potential. Nemkov also lands some devastating leg kicks and we saw how he can end a fight with a shot to the knee in his bout against Liam McGeary. Nemkov is a balanced fighter and has legit star potential as he approaches just 28 years old.

Bader should be the favorite given that he’s the champion, and he’s the bigger fighter with more pop in his hands. Bader also has the wrestling to control the fight on the canvas, even though he’s focused more on his striking over the years. With all that said, Nemkov is the more technical sound fighter who can pick his spots on the feet and wear down the bigger fighter in Bader in the clinch and with his grappling skills. Nemkov is a legit rising star and it’s hard to ignore him in the underdog role.