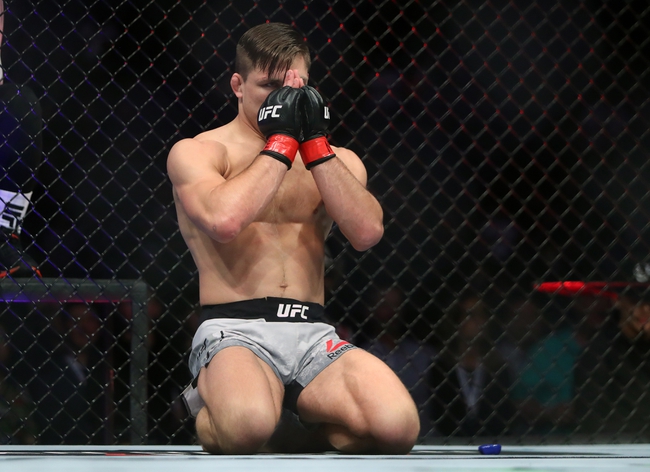 Alexander Hernandez enters this fight with a 11-2 record and has won 45 percent of his fights by decision. Hernandez has won nine of his last 10 fights and is coming off a July win over Francisco Trinaldo. Hernandez is averaging 3.07 significant strikes per minute with an accuracy percentage of 41 percent. Hernandez is averaging 1.52 takedowns with an accuracy percentage of 30 percent. Hernandez is coming off a unmaious decision victory despite his opponent being far more accurate with the strikes. Either way, Hernandez bounced back nicely from his loss to Donald Cerrone and is 3-1 under the UFC banner. Hernandez comes from a wrestling background and has seen eight of his 13 fights end in submissions or decisions. Hernandez has an impressive gas tank and appears to be more comfortable in the clinch or on the canvas. However, Hernandez also has one-punch knockout potential and does a good job of closing the distance when on his feet. At 27 years old, Hernandez is a fighter to keep an eye on, especially if he continues to improve his striking ability. This will be Hernandez’s first career fight in Florida.

Drew Dober enters this fight with a 22-9 record and has won 41 percent of his fights by knockout. Dober has won five of his last six fights and is coming off a January win over Nasrat Haqparast. Dober is averaging 4.51 significant strikes per minute with an accuracy percentage of 40 percent. Dober is averaging 0.95 takedowns with an accuracy percentage of 17 percent. Dober has put together back-to-back first round knockout victories and just earned performance of the night honors at UFC 246. Dober is easily enjoying the best stretch of his career when you consider the competition he’s going against. Dober is a southpaw who has a deep background in Muay Thai and has wrestled since an early age, so he’s highly effective in the clinch and is prepared for a lengthy, drawn out fight that tests both fighters conditioning. Ten of Dober’s last 14 victories have ended in either a decision or a submission. However, Dober has shown in his last two fights that his striking ability shouldn’t be overlooked and he’s willing to trade standing up. This will be Dober’s first career fight in Florida.

These fighters have very similar styles, as they’re probably at their best on the ground, but they’ve improved their standup over the years and have some knockout potential in those strikes. Hernandez has the edge given that he’s the bigger fighter with a two-inch reach advantage, but I’m still siding with Dober in this bout. Dober is the more technical fighter between the two and back-to-back knockouts only builds his confidence. Dober should be able to use his craftiness and southpaw stance to his advantage on the feet, and I trust him more on the canvas given his submission history.

Give me Dober and the rather cheap price.  CLICK HERE TO BET THIS UFC FIGHT