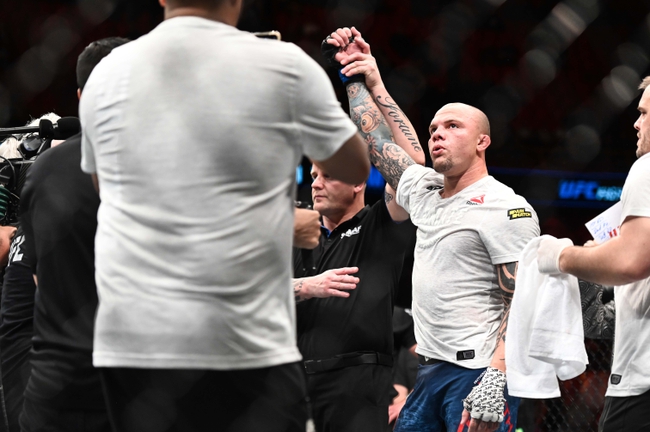 Anthony Smith enters this fight with a 33-14 record and has won 55 percent of his fights by knockout. Smith has won seven of his last nine fights and is coming off a June win over Alexander Gustafsson. Smith is averaging 3.06 significant strikes per minute with an accuracy percentage of 47 percent. Smith is averaging 0.41 takedowns with an accuracy percentage of 26 percent. Smith is coming off an impressive fight where he was losing on the strike numbers but eventually ended things in the fourth round with a submission. Smith earned performance of the night honors at UFC Fight Night 153, and he’s now finished each of his last seven victories. Besides his toughness and ability to take a punch, Smith is an athletic striker who is creative on his feet and has true one-punch knockout power. Smith is highly effective with his legs and knees, and he’s comfortable on the canvas where he has 12 career submission victories. Smith put himself in a different light in a competitive bout against Jon Jones and is somebody who could earn another title bout given that he’s still just 31 years old. This will be Smith’s first career fight in Florida.

Glover Teixeira enters this fight with a 30-7 record and has won 57 percent of his fights by knockout. Teixeira has won seven of his last 10 fights and is coming off a September win over Nikita Krylov. Teixeira is averaging 3.41 significant strikes per minute with an accuracy percentage of 44 percent. Teixeira is averaging two takedowns with an accuracy percentage of 38 percent. Teixeira is coming off a competitive split decision victory where the strikes were even but he was far more accurate. Teixeira has now won three straight fights and looks for four straight victories for the first time since 2012-13. Teixeira has proven his versatility over his career, as he lands accurate and powerful punches that allow him to fight standing up, mixes in leg kicks well, and he's a successful takedown artist with eight submission victories under his belt. With a deep background in Kajukenbo, there’s nothing Teixeira can’t do in the octagon and he’s far from your typical heavyweight who just throws haymakers and hopes to knock the lights out. And while he’s 40 years old and has branched out into other things, this recent stretch has proven Teixeira still has something left in the gas tank. This will be Teixeira’s third career fight in Florida.

This should be a fun fight between two fighters with similar skill sets and heavyweights with the ability to get the job done on the ground. The difference for me is that Smith is the bigger fighter with more pop in his hands, and he’s the younger, more athletic fighter in this matchup with probably the better conditioning. While Teixeira has strung together some nice wins, he is up there in age and I’m not running to the window to back him against above-average fighters in this division.

I like Smith to get the job done in this bout.