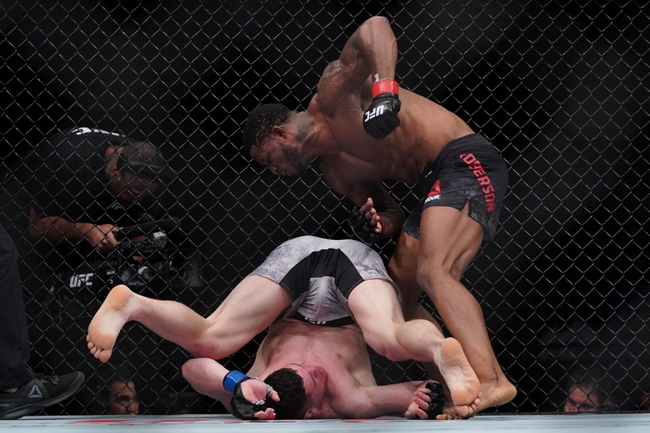 Marvin Vettori enters this fight with a 14-4-1 record and has won 57 percent of his fights by submission. Vettori has split his last six fights and is coming off an October win over Andrew Sanchez. Vettori is averaging 4.05 significant strikes per minute with an accuracy percentage of 41 percent. Vettori is averaging 1.43 takedowns with an accuracy percentage of 45 percent. Vettori is coming off a dominating decision victory where he landed more than double his opponents strikes at double the percentage. Vettori has now won back-to-back fights since his 2018 loss to Israel Adesanya. Vettori is a balanced fighter who could soon become a star given that he’s only 26 years old. Vettori is highly skilled on his feet where he throws violent combinations, but he’s also quite an athlete for his size and loves to throw knees out of nowhere, which we saw against Omari Akhmedov. Vettori is also highly effective in the clinch and has good scrambling skills that allow him to survive on the canvas. Vettori’s last three submission victories have come via the guillotine choke. This will be Vettori’s second career fight in Florida.

Karl Roberson enters this fight with a 9-2 record and has won 44 percent of his fights by submission. Roberson has won three of his last four fights and is coming off a November win over Roman Kopylov. Roberson is averaging 3.16 significant strikes per minute with an accuracy percentage of 52 percent. Roberson is averaging 1.07 takedowns with an accuracy percentage of 57 percent. Roberson is enjoying the best stretch of his MMA career and he’s now 4-2 under the UFC banner. Roberson has a chance to win three straight fights for the first time since 2017. Roberson is an athletic fighter who comes from a kickboxing background and is very dangerous on his feet due to the power he has and his length. Roberson has to like his chances on his feet at all times, but he also has four submission victories, so he’s comfortable on the canvas as well and is fresh off winning a fight via the rear-naked choke. With just 11 pro fights under his belt, Roberson has a chance to become a scary fighter in this division rather quickly. This will be Roberson’s first career fight in Florida.

Vettori should probably be the favorite given the experience edge and the fact he’s had more success against better competition. However, Roberson is a powerful striker who is learning to become comfortable on the canvas. Roberson is a fighter I’m going to be watching very closely, as he may be turning 30 years old at the end of the year, but there’s a lot of potential for him to fly up the rankings rather quickly.

Roberson is too talented to turn down with the plus money.