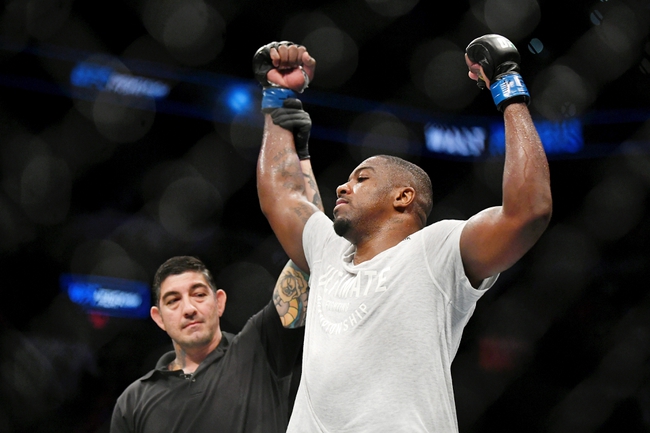 Alistair Overeem enters this fight with a 45-18 record and has won 51 percent of his fights by knockout. Overeem has split his last eight fights and is coming off a December loss to Jairzinho Rozenstruik. Overeem is averaging 3.54 significant strikes per minute with an accuracy percentage of 62 percent. Overeem is averaging 1.39 takedowns with an accuracy percentage of 53 percent. Overeem is coming off a frustrating loss, as he was in complete control of the bout and then suffered a last minute knockout out of nowhere. Overeem would have early won the fight if it went to the judges, but he’s now been knocked out in three of his last five fights. Overeem is what he is at 40 years old, and that’s a ferocious stand up striker with powerful combinations in his hands and nasty knees in the clinch. With a deep kickboxing background, Overeem has some of the best leg kicks to the body and usage of his knees in the sport, and they’re capable of producing a knockout with one clean shot. Overeem is also a well polished grappler and has eight career victories via the guillotine choke. The downside will always be Overeem’s chin, as 14 of his 18 career losses have come by knockout. Win or lose, Overeem’s fights usually end in fireworks and his last bout was no different. This will be Overeem’s second career fight in Florida.

Walt Harris enters this fight with a 13-7 record and has won 100 percent of his fights by knockout. Harris has won each of his last four fights and is coming off a July win over Aleksei Oleinik. Harris is averaging 2.96 significant strikes per minute with an accuracy percentage of 38 percent. Harris is averaging 0.35 takedowns with an accuracy percentage of 33 percent. Harris hasn’t lost since UFC 217 and is coming off a first round knockout that earned him performance of the night honors at UFC on ESPN 4. Harris has earned performance bonuses in his last two fights. There’s no secrets when it comes to Harris, as he’s an athletic, explosive fighter who relies on his striking ability and has won all 13 of his fights by knockout. Harris is a nightmare standing up and he does a lot of his work in the early rounds. However, if an opponent can survive the early onslaught from Harris, they have a really good chance of wearing him down and stealing the fight. This will be Harris’ fourth career fight in Florida.

This fight is sure to have some fireworks and big strikes, and Overeem can’t be overlooked despite his age, as he’s proven he’s still effective and can hold his own on his feet. However, Overeem has a questionable chin and when he’s going up against a strong, powerful striker, those questions become a serious issue. Harris is the younger, stronger and more athletic fighter, and he’s going to test that chin early. I don’t like this matchup for Overeem, especially after how his last bout went down.

Give me Harris and the reasonable price.