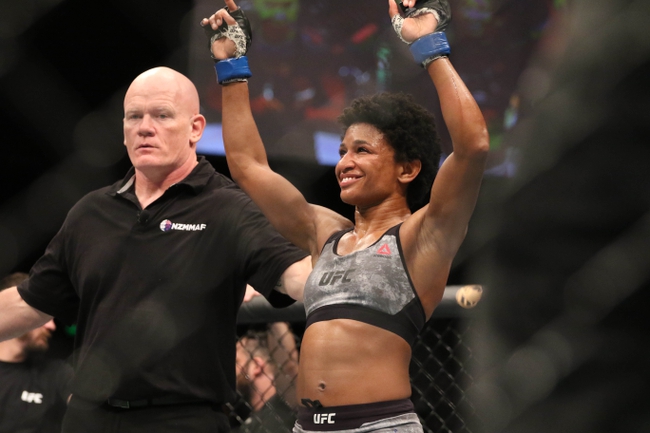 Claudia Gadelha enters this fight with a 17-4 record and has won 47 percent of her fights by decision. Gadelha has won four of her last six fights and is coming off a July win over Randa Markos. Gadelha is averaging 3.17 significant strikes per minute with an accuracy percentage of 42 percent. Gadelha is averaging 3.34 takedowns with an accuracy percentage of 47 percent. Gadelha is coming off an impressive decision victory where she showed solid defense and was in control from start to finish. Gadelha now looks for back-to-back wins for the first time since 2016-17, as she’s split her last four fights. Gadelha has proven she’s a balanced fighter, as she’s a second degree black belt in BJJ and has a background in Muay Thai, so she can hold her own standing up or on the ground. At the UFC level, Gadelha has been a takedown machine and has shown an impressive gas tank that’s allowed her to win eight of her 12 career decisions. Gadelha has never been finished in her career. This will be Gadelha’s first career fight in Florida.

Angela Hill enters this fight with a 12-7 record and has won 58 percent of her fights by decision. Hill has won each of her last three fights and is coming off a February win over Loma Lookboonmee. Hill is averaging 5.74 significant strikes per minute with an accuracy percentage of 49 percent. Hill is averaging 0.50 takedowns with an accuracy percentage of 37 percent. Hill is coming off a tight decision victory at UFC Fight Night 168 and will now fight for the third time this year. Hill has won seven of her 12 career decisions and looks for four straight victories for the first time since 2016. Hill is a polished striker with a background in Muay Thai and kickboxing, and she has one-inch knockout potential with five career knockout victories. Hill wants a fight standing up where she can use her athleticism and accuracy to her advantage, and she’s shown very little on the ground at the UFC level. Ten of Hill’s last 13 fights have ended in decisions. This will be Hill’s third career fight in Florida.

Gadelha should be the favorite should be the favorite based on her experience and the fact she’d have a clear edge with her takedowns and her ground game. Gadelha has been here done that and has been far more consistent throughout her career. With that said, Hill has looked highly impressive during this three-fight winning streak and seems to finally be comfortable on this stage after some struggles early. Hill has some of the best Muay Thai in this division and has some solid momentum behind her right now.

I’ll side with Hill and the plus money.