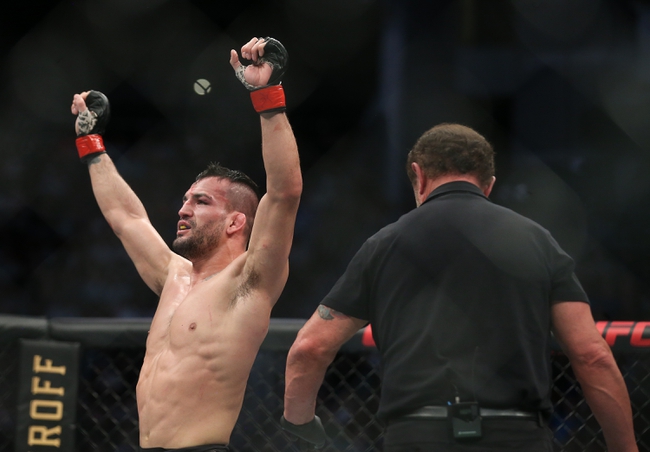 Edson Barboza enters this fight with a 20-8 record and has won 60 percent of his fights by knockout. Barboza has lost four of his last five fights and is coming off a September loss to Paul Felder. Barboza is averaging 4.01 significant strikes per minute with an accuracy percentage of 43 percent. Barboza is averaging 0.49 takedowns with an accuracy percentage of 44 percent. Barboza is coming off a controversial split decision considering he landed more strikes and was far more accurate. Either way, Barboza has won just three fights since UFC 197 and could use a feel good result to get the 34-year-old back on track. Barboza is known for his leg work and is one of the best in the sport thanks to a deep kickboxing background and being a black belt in Taekwondo. You allow Barboza to stand up and fight from the outside, he’s going to pick you apart and chop your legs until you can’t move. In his last fight, Barboza landed 14 of his 16 attempted significant leg strikes and it’s where 23 of his landed strikes took place. Barboza also has a background in Muay Thai and BJJ, but opponents know what they’re getting from the Brazilian when he steps into the octagon. This will be Barboza’s third career fight in Florida.

Dan Ige enters this fight with a 13-2 record and has won 38 percent of his fights by submission. Ige has won each of his last five fights and is coming off a February win over Mirsad Bektic. Ige is averaging 3.89 significant strikes per minute with an accuracy percentage of 49 percent. Ige is averaging 2.38 takedowns with an accuracy percentage of 35 percent. Ige is coming off a solid performance that earned him his fifth straight victory, and he’s now won each of his last three decisions. Ige is now 5-1 since participating in Dana White's Contender Series 3 three years ago. Ige is a black belt in BJJ and has some knockout power, but he’s been most impressive on the canvas and has displayed quite a gas tank that’s allowed him to win five of his seven career decisions. Ige has solid defense standing up and has five submission victories for his career. At 28 years old, Ige is starting to make a name in the featherweight class and could see a title shot eventually if he stays on this pace. This will be Ige’s second career fight in Florida.

Barboza has a serious size advantage in this fight and has a four-inch reach advantage, so it’s obvious to see him as the favorite in this fight. However, Barboza is in a real poor stretch at the moment and isn’t somebody I’m running to the window to bet. Ige may be undersized in this fight, but he’s in far better form and he has the ground game advantage if this fight ended up on the canvas. Ige also has decent defense standing up, so he should be able to check those leg kicks and force Barboza to switch things up.

I’ll take a shot with Ige and the plus money.