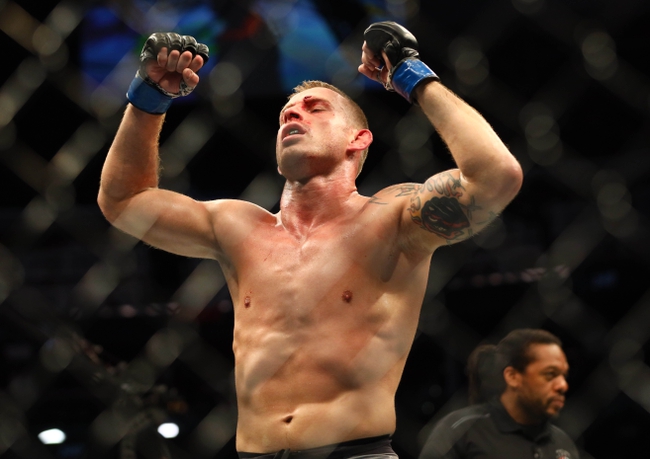 Eryk Anders enters this fight with a 13-4 record and has won 62 percent of his fights by knockout. Anders has split his last eight fights and is coming off an October win over Gerald Meerschaert. Anders is averaging 3.06 significant strikes per minute with an accuracy percentage of 45 percent. Anders is averaging 1.51 takedowns with an accuracy percentage of 40 percent. Anders is coming off a tight split decision victory in his return to middleweight, and he’s now won back-to-back fights and is probably in his best form under the UFC banner. Anders looks for three straight victories for the first time since 2017. Anders is still primarily a striker with a strong upper body and pure knockout power in his hands. Coming from a deep football background and still learning MMA on the fly, Anders has improved his clinch game these past couple of years and is decent at defending takedowns. Anders is still a work in progress, but his striking and ground and pound has gotten him to this point in just four years and remains his bread and butter. Anders will become a much better fighter once he improves his wrestling and ability to fight on the canvas with more comfortability. This will be Anders’ second career fight in Florida.

Krzysztof Jotko enters this fight with a 21-4 record and has won 67 percent of his fights by decision. Jotko has won seven of his last 10 fights and is coming off a July win over Marc-Andre Barriault. Jotko is averaging 2.84 significant strikes per minute with an accuracy percentage of 44 percent. Jotko is averaging 1.39 takedowns with an accuracy percentage of 40 percent. Jotko is coming off a tight split decision he could have easily lost given that his opponent was more accurate with the strikes. Jotko has now won 14 of his 15 career decisions and he looks for three straight victories for the first time since 2016. Jotko is an awkward striker with clear knockout power and has an effective ground and pound game. Jotko is also not shy with his takedown attempts despite just one career submission victory, and he does a good job of controlling the fight and has an above-average gas tank that allows him to be effective for all three rounds. A tough Polish fighter, Jotko simply finds ways to win even if it’s not always pretty. This will be Jotko’s fourth career fight in the United States.

Anders in the underdog role is intriguing because of his knockout power and the fact he needs to land just one shot to turn a fight upside down. The problem is Anders is still raw and isn’t a fighter I’m looking to back against more experienced guys. Anders has shown little in the clinch and still isn’t comfortable on the canvas. Jotko is a tough Polish fighter who can take a punch, but he’s also a grinder who has takedown success and can simply drag Anders into deep waters. This just feels like a bad matchup for the American.

Give me Jotko for the victory.