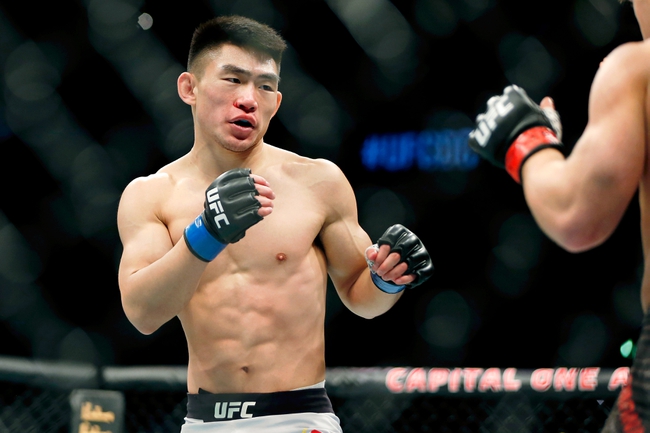 Marlon Vera enters this fight with a 15-5-1 record and is winning 53 percent of his fights by submission. Vera has won each of his last five fights and is coming off an October win over Andre Ewell. Vera is averaging 3.43 significant strikes per minute with an accuracy percentage of 47 percent. Vera is averaging 0.76 takedowns with an accuracy percentage of 38 percent. Vera is enjoying the best stretch of his career and is coming off an impressive knockout that earned him performance of the night honors at UFC Fight Night 161. Vera has finished each of his last seven victories and has a chance to continue making noise at 27 years old in the bantamweight division. Vera is an athletic, jumpy fighter who is tough to get comfortable against on the feet and he throws compact strikes and leg kicks with some pop behind them. Vera is also a black belt in BJJ, so he knows his way around the canvas, and he’s never been finished in his career despite the five losses. Vera is an exciting fighter with a polished skill set and has a chance to seriously climb these rankings if he stays on this track he’s been on the last couple years. This will be Vera’s second career fight in Florida.

Song Yadong enters this fight with a 15-4-1 record and is winning 40 percent of his fights by knockout. Yadong has won each of his last five fights and is coming off an October win over Andre Ewell. Yadong is averaging 3.54 significant strikes per minute with an accuracy percentage of 38 percent. Yadong is averaging 0.97 takedowns with an accuracy percentage of 100 percent. Yadong watched his seven fight winning streak end with a draw after he was deducted a point due to an illegal knee. Yadong still hasn’t lost a fight since 2016, and he’s 4-0-1 under the UFC banner. Yadong has a background in Sanda and BJJ, so he’s very comfortable on his feet and has terrific boxing skills that allow him to get in and out quickly, and he has some true knockout power. Yadong is probably more comfortable on his feet, but he also has three carer submissions and is quite athletic that allows him to change position and grapple well. At just 22 years old, Yadong is a name to watch closely, as he’s highly skilled and has some of the best boxing in the bantamweight division. This will be Yadong’s third career fight in the United States.

This line is rather disrespectful to Vera who is on quite a roll right now and is fresh off performance of the night honors at UFC Fight Night 161. Vera also has the reach advantage, so if this fight stays on the feet, he has to like his chances. With that said, Yadong is a young star on the rise with some of the best boxing in this division. The hand speed, timing and head movement from Yadong is all highly impressive and he’s still extremely young. Yadong is going to be here for a long time and I suggest you jump on the hype train before it gets too full.

Give me Yadong for the victory.