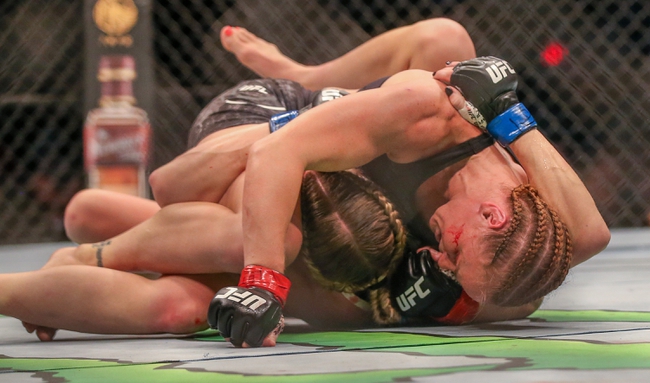 Katlyn Chookagian and Antonina Shevchenko fight Saturday during UFC on ESPN 9 at the UFC APEX.

Katlyn Chookagian enters this fight with a 13-3 record and has won 77 percent of her fights by decision. Chookagian has won five of her last seven fights and is coming off a February loss to Valentina Shevchenko. Chookagian is averaging 4.11 significant strikes per minute with an accuracy percentage of 32 percent. Chookagian is averaging zero takedowns with an accuracy percentage of zero percent. Chookagian saw her hot streak come to an end when she was knocked out in the third round of the UFC Women's Flyweight Championship in pretty much a one-sided fight. Chookagian now hopes to avoid back-to-back losses for the first time in her career and is fighting for the third time since November. Chookagian is most comfortable standing up, as she has some decent striking skills and a background in karate, and she does have two knockouts via knees. However, Chookagian is more of a points fighter who doesn’t take much risk, doesn’t put much power behind her shots and is looking to do just enough to get a victory with the judges. Chookagian’s fights can be very tough to judge due to the lack of action a lot of the time, and 12 of her 16 career fights have ended in decision. This will be Chookagian’s first career fight in Las Vegas.

Antonina Shevchenko enters this fight with a 8-1 record and has won 63 percent of her fights by decision. Shevchenko has won five of her last six fights and is coming off an August win over Lucie Pudilova. Shevchenko is averaging 4.90 significant strikes per minute with an accuracy percentage of 57 percent. Shevchenko is averaging 0.67 takedowns with an accuracy percentage of 100 percent. Shevchenko is coming off a second round submission victory that she dominated and won fight of the night honors at UFC on ESPN 5. Shevchenko will fight for the third time in a little over a year and looks for her biggest victory of her career yet. Shevchenko is obviously the sister of champion Valentina Shevchenko, and she has a deep background in kickboxing and Muay Thai. Shevchenko is versatile on her feet, athletic and can be tricky to read due to her southpaw stance. Shevchenko is probably most comfortable on her feet, but she’s also shown some ability to hold her own on the canvas and her recent rear-naked choke victory is encouraging moving forward. This will be Shevchenko’s third career fight in Las Vegas.

It’s always tough to get behind Chookagian with any confidence knowing she rarely looks for the finish and you’re likely going to get a toss up fight that is in the hand of judges who have handed out some odd results as of late. However, we’re getting Chookagian as an underdog, the same fighter who was fighting for the belt her last time out. Shevchenko is the more aggressive fighter between the two and may have the edge if this fight goes to the ground, but it’s hard to pass up Chookagian in the underdog role when she has more experience on this level and was given a shot to beat the best fighter in the division just a couple months ago.

Give me Chookagian in a mild upset.