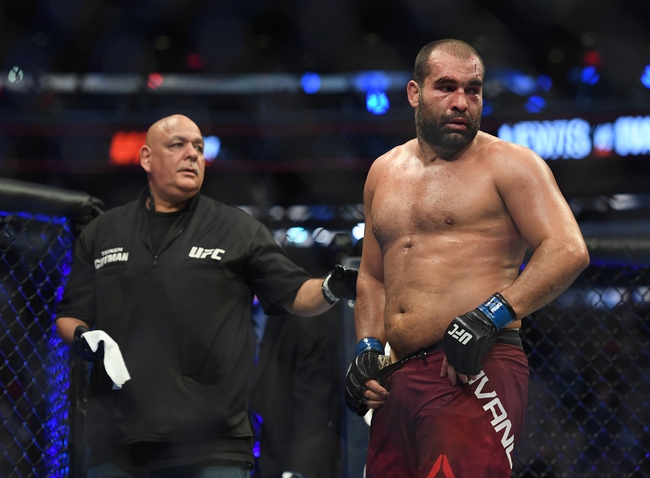 Blagoy Ivanov enters this fight with a 18-2-1 record and has won 33 percent of his fights by knockout. Ivanov has won six of his last eight fights and is coming off a November loss to Derrick Lewis. Ivanov is averaging 3.09 significant strikes per minute with an accuracy percentage of 38 percent. Ivanov is averaging 1.07 takedowns with an accuracy percentage of 62 percent. Ivanov is coming off a controversial split decision loss at UFC 244 where he was the more accurate striker and had three takedowns. Ivanov now looks to avoid back-to-back losses for the first time in his career. Ivanov is a unique heavyweight who has a background in Sambo, Judo and kickboxing, so he’s far more than your traditional fighter in this division who relies heavily on pure striking power. Ivanov is polished with his wrestling, takedown ability and he has six career submission victories, three via the guillotine choke. Ivanov has striking power, but he can be a bit slow with his hands. It’s what Ivanov can do on the canvas that separates him from a lot of other fighters in this division. Ivanov can be effective in the clinch and he’s never been knocked out in 22 fights. This will be Ivanov’s first career fight in Las Vegas.

Augusto Sakai enters this fight with a 14-1-1 record and has won 79 percent of his fights by knockout. Sakai has won each of his last five fights and is coming off a September win over Marcin Tybura. Sakai is averaging 5.51 significant strikes per minute with an accuracy percentage of 46 percent. Sakai is averaging 0.24 takedowns with an accuracy percentage of 50 percent. Sakai is coming off a first round knockout at UFC Fight Night 158 and is now 4-0 under the UFC banner since taking part in the Dana White's Contender Series Brazil. Sakai hasn’t lost since a split decision three years ago against Cheick Kongo in Bellator and now looks for his biggest victory yet. Sakai is a 29-year-old Brazilian who comes from a boxing background and has seen all 16 of his fights either end in knockout or decision. Sakai has clear power in his hands, and he’s effective in both the clinch and with his ground and pound. Sakai will throw haymakers when he gets his opponent against the cage and he’s not afraid to mix in some legs or knees. The problem with Sakai is he can be a bit sloppy with his attack and his hand speed isn’t great. We also need to see Sakai tap into his ground game if he’s going to be trusted against some of these bigger names. This will be Sakai’s second career fight in Las Vegas.

Sakai is going to have his chance in this fight simply because he has a big size advantage along with a four-inch reach advantage. Sakai is also a powerful striker who has a knack for the knockout, so you can never count him out. With all that said, Sakai comes off a bit raw in his striking and his wild strikes can get countered by a more experienced fighter. Ivanov falls into that department, and he also has the ability to get this fight on the canvas where we haven’t seen Sakai tested yet. I’m actually surprised this is a toss up.

Look for Ivanov to get the job done here.