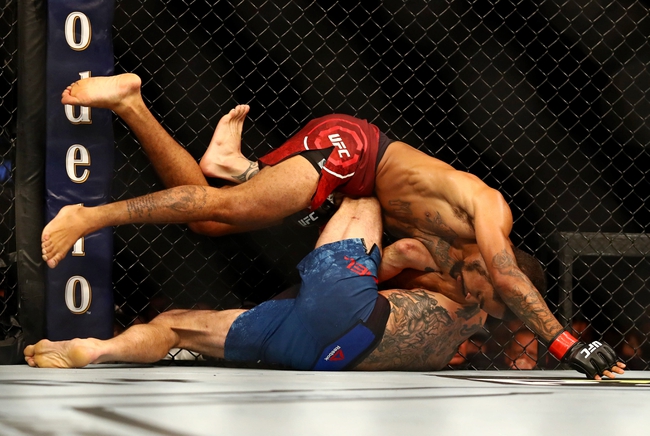 Roosevelt Roberts enters this fight with a 9-1 record and has won 44 percent of his fights by submission. Roberts’ has won five of his last six fights and is coming off a November win over Alexander Yakovlev. Roberts is averaging 2.87 significant strikes per minute with an accuracy percentage of 46 percent. Roberts is averaging 1.84 takedowns with an accuracy percentage of 63 percent. Roberts bounced back nicely from hi first career loss, landing 56 total strikes and doing a good job of holding his own on the canvas. Roberts has now seen each of his last three fights end in a decision. Roberts is an exciting fighter who has done well in a handful of UFC bouts, and he’s highly efficient with his takedowns and ground and pound. Roberts always seems to gain top position and has been a bear up to this point, not allowing his opponent to get up and either destroying them with heavy strikes or finding a submission hold. Roberts is always looking for a chance to finish a fight, so don’t let the recent decisions fool you. A brown belt in BJJ and solid scrambling skills, Roberts is somebody to watch closely in this division. This will be Roberts’ third career fight in Las Vegas.

Brok Weaver enters this fight with a 15-4 record and has won 53 percent of his fights by decision. Weaver has won each of his last eight fights and is coming off a February win over Rodrigo Vargas. Weaver is averaging 5.57 significant strikes per minute with an accuracy percentage of 73 percent. Weaver is averaging zero takedowns with an accuracy percentage of zero percent. Weaver won his UFC debut after his opponent landed an illegal knee in the first round, and he’s trowing himself right back into the octagon a few months later. Weaver hasn’t lost a fight since his 2016 bout against Martin Brown in Titan FC, and he now has a chance at the biggest win of his career yet. Weaver shows good defense on his feet, as he’s shifty, always moving and does a good job of rolling with the punches to avoid the haymakers. Weaver is a tough fighter who has also participated in Bare Knuckle Fighting and has a fight with Joe Riggs that’s become quite popular among the fighting community. Weaver seems to be at his best standing up where he can throw powerful punches and mix in kicks, but we still need to see him against better competition. Win or lose, we’ll learn more about Weaver in this bout.

Roberts is the more proven fighter of the two and probably the more balanced at this stage of their careers, as I’d give him a considerable edge if this fight ends up on the ground. I just need to see more from Weaver before I can back him with any confidence. Roberts is a prospect I could see making some serious noise in this division rather quickly.

Give me Roberts in a decision victory.