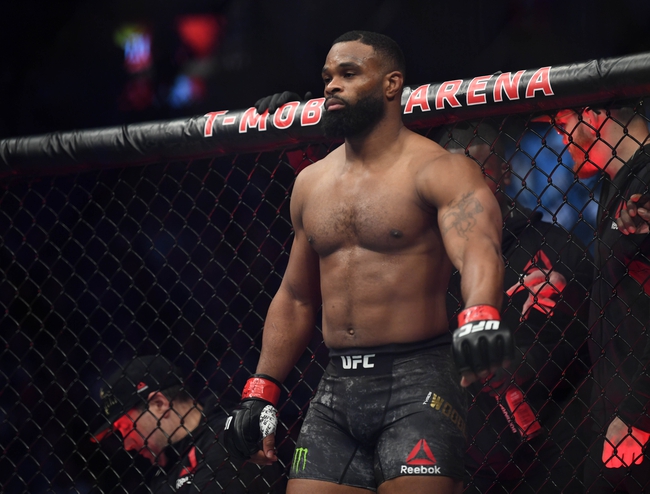 Tyron Woodley enters this fight with a 19-4-1 record and has won 37 percent of his fights by knockout. Woodley has won five of his last seven fights and is coming off a March (2019) loss to Kamaru Usman. Woodley is averaging 2.50 significant strikes per minute with an accuracy percentage of 49 percent. Woodley is averaging 1.21 takedowns with an accuracy percentage of 41 percent. Woodley is coming off his first loss since UFC 174 and should be highly motivated after losing the UFC Welterweight Championship in a one-sided contest. Woodley was controlled for five rounds and simply had zero answer for the Nigerian Nightmare. Woodley now hopes to avoid back-to-back losses for the first time in his career. Woodley has a nasty standup game with extreme power in his hands and violent leg kicks that have dropped many opponents. Woodley also has a background in wrestling, and while he hasn’t gone for a ton of takedowns under the UFC banner, he’s quite effective when he shoots and has a nasty ground and pound if a fight goes to the canvas. While Woodley is a fun watch, it’s his IQ that gives him an edge over most fighters in this division. Woodley rarely puts himself in danger, is smart defensively and has some of the best reaction speed you’ll find in the octagon. This will be Woodley’s seventh career fight in Las Vegas.

Gilbert Burns enters this fight with a 18-3 record and has won 44 percent of his fights by submission. Burns has won each his last five fights and is coming off a March win over Demian Maia. Burns is averaging 3.13 significant strikes per minute with an accuracy percentage of 44 percent. Burns is averaging 2.39 takedowns with an accuracy percentage of 38 percent. Burns is coming off a first round knockout that earned him performance of the night honors at UFC Fight Night 170. It was the first knockout win for Burns in nearly two years and he now looks for six straight wins, which would be his longest streak since starting his career with a 10-0 record. Burns has a decorated grappling background with plenty of experience in wrestling, and he’s a second degree black belt in BJJ. Burns is quick to find a submission hold once he gets the bout to the canvas and few have his grappling credentials, but he’s also decent on his feet with some pop in his hands and a come forward style, and his latest bout only gives him more confidence. Burns doesn’t look as uncomfortable standing up as many guys with his background do, and he now has six knockout wins on his resume. This will be Burns’ third career fight in Las Vegas.

Burns is on such a roll right now that he has to be considered with the plus money, and he’s been the much more active fighter with him fighting a couple months ago. Woodley has been out of the octagon for more than a year and there’s a lot of pressure on him coming off that loss to Usman. Back-to-back losses doesn’t help Woodley get a big fight against a contender in his next bout. With all that said, I’m leaning toward Woodley in this fight. Woodley is the more powerful striker standing up with a longer reach, and he has a clear edge in the wrestling department. Woodley should look to get Burns on his back and possibly finish this thing with ground and pound.

Woodley gets a much needed bounce back victory.