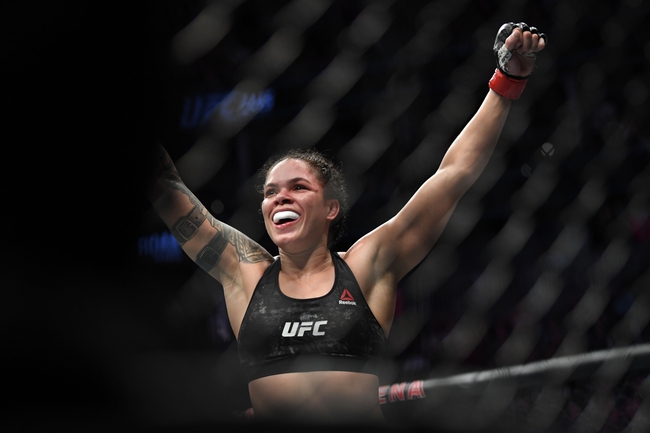 Felicia Spencer and Amanda Nunes fight Saturday during UFC 250 at a location undecided. Click Here To Bet This UFC Fight

Felicia Spencer enters this fight with a 8-1 record and has won 50 percent of her fights by submission. Spencer has won five of her last six fights, and she’s coming off a February win over Zarah Fairn Dos Santos. Spencer is averaging 4.54 significant strikes per minute with an accuracy percentage of 55 percent. Spencer is averaging 1.36 takedowns with an accuracy percentage of 16 percent. Spencer bounced back nicely from her first career loss with a first round knockout, and she’s now finished each of her last four victories. Spencer dominated the fight from start to finish, and she landed 40 significant strikes to her opponents 13. Despite the knockout victory, Spencer isn’t the most polished standup striker in the world, but she can do just enough until getting in the clinch and forcing a fight to the canvas. A black belt in Brazilian jiu-jitsu, Spencer is at her best on the ground where she dominates with her wrestling and can quickly find a submission hold. Spencer has also shown some impressive ground and pound and she has a black belt in Taekwondo, so kicks are key to her standup attack. While a limited sample size overall, Spencer has a lot of the tools to become a household name in this division and she showed her toughness against Cris Cyborg.

Amanda Nunes enters this fight with a 19-4 record and has won 68 percent of her fights by knockout. Nunes has won her last 10 fights and is coming off a December win over Germaine de Randamie. Nunes is averaging 4.34 significant strikes per minute with an accuracy percentage of 49 percent. Nunes is averaging 2.33 takedowns with an accuracy percentage of 47 percent. Nunes didn’t get the finish, but she dominated for five rounds where she landed 39 more significant strikes than her opponent and produced eight takedowns. It was the first decision victory for Nunes since her split decision bout against Valentina Shevchenko at UFC 215. Nunes continues to build a case for the best female fighter in the history of the MMA. Nunes is an accurate striker who cuts off the octagon and can land bombs when she has her opponent on her heels. Nunes is also a black belt in Brazilian jiu-jitsu and is effective when she looks for takedowns. Nunes is as balanced as anybody in the sport with a high IQ and ability to end the fight on her terms while getting the fight she wants. Nunes hasn’t lost a fight in nearly six years, producing one of the best stretches we’ve seen in the UFC.

Spencer has the tools to be successful against the top names and she’d love her chances here if she can get the fight to the canvas and draw Nunes into deep waters. Spencer also showed her toughness going blow for blow with Cyborg, so there’s a lot of positives heading into this bout and she should be confident she can at least survive the punishment and get this thing into championship rounds where anything can happen. With all that said, Spencer isn’t polished enough to think she’s going to be the one to end the streak. Spencer can still be a bit inaccurate with her standup striking and she’s never fought somebody as strong in the clinch or preventing takedowns as Nunes. I would have liked this fight more a couple years down the road were Spencer had more experience against top tier competition. This feels a bit rushed.

I like Nunes a lot in the fight and I’d predict a finish to shave down the ML price. Click Here To Bet This UFC Fight