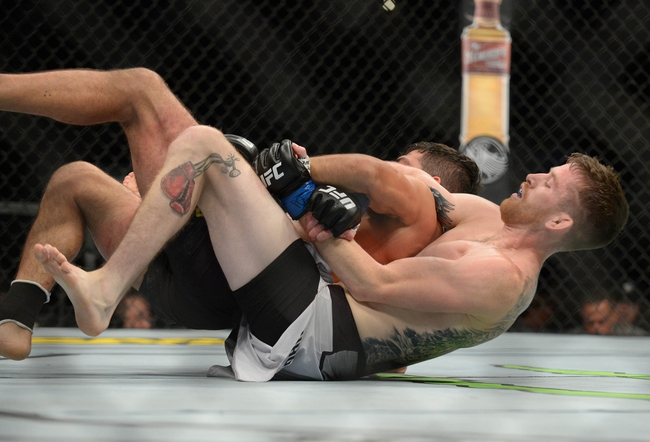 Aljamain Sterling and Cory Sandhagen fight Saturday during UFC 250 at the UFC APEX. Click Here To Bet This UFC Fight

Aljamain Sterling enters this fight with a 18-3 record and has won 50 percent of his fights by decision. Sterling has won six of his last seven fights and is coming off a June win over Pedro Munhoz. Sterling is averaging 4.85 significant strikes per minute with an accuracy percentage of 50 percent. Sterling is averaging 1.91 takedowns with an accuracy percentage of 29 percent. Sterling is now on a four-fight winning streak after landing 175 total strikes at a 49 percent clip and getting the nod in a unanimous decision. Sterling has now won each of his last five decisions and has won nine of his 11 career decisions overall. Sterling is an accurate striker with an impressive work rate and he’s a black belt in BJJ. Sterling has a background in Division III wrestling and he’s never been finished on the canvas while he has seven career submissions. Sterling has become a really balanced fighter and as he approaches 31 years old, a title shot shouldn’t be too far behind if he stays on this path. This will be Sterling’s fourth career fight in Las Vegas.

Cory Sandhagen enters this fight with a 12-1 record and has won 42 percent of his fights by decision. Sandhagen has won each of his last seven fights and is coming off an August win over Raphael Assuncao. Sandhagen is averaging 7.14 significant strikes per minute with an accuracy percentage of 48 percent. Sterling is averaging 1.24 takedowns with an accuracy percentage of 50 percent. Sandhagen improves to 5-0 under the UFC banner, and he hasn’t lost a fight in over three years dating back to his LFA days. Sandhagen is coming off a victory where he landed 78 total strikes at a 53 percent clip, and he’s now 5-1 in his career in bouts that go to the judges. Sandhagen has a background in kickboxing and is a brown belt in BJJ. Sandhagen is a bouncy athlete who fights with a lot of energy and isn’t afraid to let his hands go and is highly effective in ground and pound if a fight gets to the canvas. Sandhagen does a wonderful job of closing the distance and is terrific in the clinch where he uses knees and elbows to change the outlook of a fight quickly. As he just turned 28 years old, Sandhagen has put this division on notice in such a short amount of time. This will be Sandhagen’s first career fight in Las Vegas.

This has the potential to be the best fight on the card with two hot fighters who have a reputation for high work rates and aggressive styles. Expect some fireworks and with this being a true pick em, it tells you you’re in for a treat. I’m giving the edge to Sandhagen because of his energy and ability to fight in the clinch. Sandhagen makes opponents uncomfortable with his come forward style and ability to use everything in his toolbox to get the fight where he wants it. Sandhagen is also four inches taller in this bout, so he’s going to have some angles on his feet he can use to his advantage here.

Toss up fight, but I like Sandhagen to keep the winning streak alive.