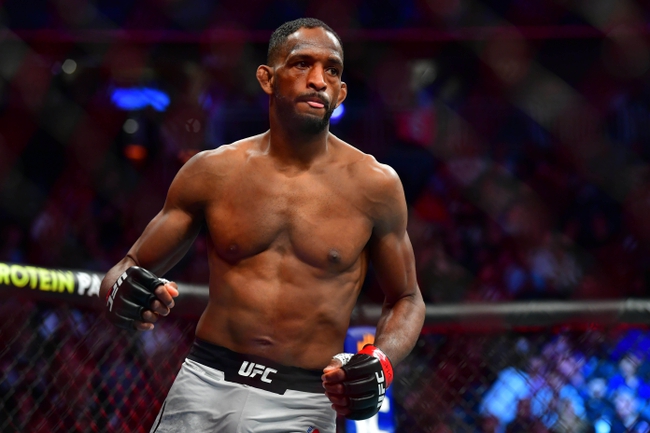 Neil Magny and Rocco Martin fight Saturday during UFC 250 at the UFC APEX. Click Here To Bet This UFC Fight

Neil Magny enters this fight with a 22-7 record and has won 55 percent of his fights by decision. Magny has won seven of his last 10 fights and is coming off a March win over Li Jingliang. Magny is averaging 3.93 significant strikes per minute with an accuracy percentage of 46 percent. Magny is averaging 2.70 takedowns with an accuracy percentage of 47 percent. Magny is coming off an impressive victory at UFC 248 where he landed 123 total strikes at a 53 percent clip and produced four takedowns. Magny will now jump right back into the octagon with just a couple of months of rest and a chance to send a message to the rest of this division. Magny is a busy fighter who doesn’t mind trading punches in the standup and his willingness to fight from close range and stare danger in the face is why he has such impressive striking numbers. Magny is also an athletic takedown artist who can usually get the fight to the canvas when he wants, and he has an impressive ground and pond approach. Magny is also a well conditioned fighter who has won 12 of his 13 career decisions and that one decision loss came nearly seven years ago. Magny is a long, rangy fighter who probably deserves more respect than he gets. This will be Magny’s fifth career fight in Las Vegas.

Rocco Martin enters this fight with a 17-5 record and has won 53 percent of his fights by submission. Martin has won five of his last six fights and is coming off a November win over Ramazan Emeev. Martin is averaging 2.70 significant strikes per minute with an accuracy percentage of 36 percent. Martin is averaging 0.68 takedowns with an accuracy percentage of 25 percent. Martin is coming off a tight decision victory at UFC Fight Night 163 that could have gone either way, and he’s now seen each of his last three fights go to the judges. In the victory, Martin landed 48 total strikes at a 29 percent clip and a lot of that work were leg kicks. Martin is a black belt in Brazilian jiu-jitsu and is a grappler and wrestler at heart. Martin has seen 21 of his 22 career fights end in either submission or decision, with that lone knockout coming at UFC 229. Martin is a better striker than the numbers suggest and his athleticism allows him to close off the octagon and land some shots on his feet, but he’s at his best when he can muck things up in the clinch and potentially find a submission hold on the canvas. Three of Martin’s nine career submission victories have come via the kimura. This will be Martin’s second career fight in Las Vegas.

You can never count out Martin who is always in quality shape and ready for a three round battle where he drags his opponent into deep waters and competes. However, Magny has Martin beat in a lot of areas in this fight, especially on the feet where he can use his massive size advantage and a ridiculous seven inch reach advantage. Magny is the more powerful striker, and his length and size advantage will make things tough for Martin as well in the clinch or on the canvas. This is a fight Magny should be able to control and the fact the odds are closer to a pick em than anything is almost a bit disrespectful.