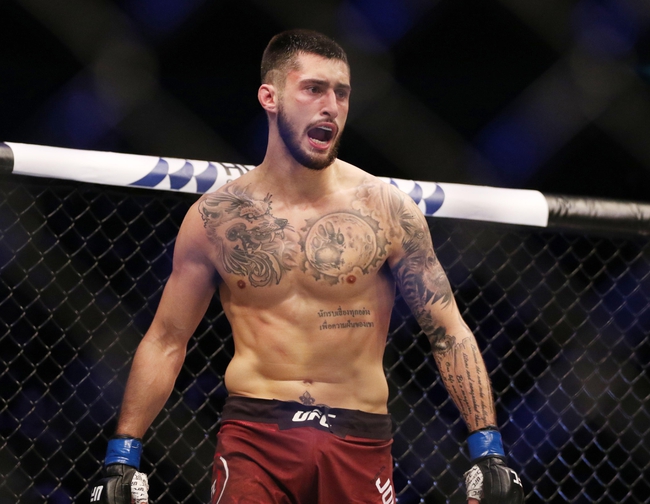 Andre Fili enters this fight with a 20-7 record and has won 45 percent of his fights by knockout. Fili has won four of his last six fights and is coming off a January win over Sodiq Yusuff. Fili is averaging four significant strikes per minute with an accuracy percentage of 37 percent. Fili is averaging 2.49 takedowns with an accuracy percentage of 45 percent. Fili is coming off a one-sided fight for the most part at UFC 246 where he lost by an unanimous decision despite lading 56 total strikes and producing three takedowns. Fili, who is in the octagon a few months later, hopes to avoid back-to-back losses for the first time in his career. Fili is a wild athlete who has a high work rate and is most comfortable on his feet due to a street fighting background. Fili has legit knockout power in his hands and mixes in strong leg kicks as well, but he has just one knockout in the last four years. Fili has impressive conditioning for a guy who fights the way he does, and it’s allowed him to win eight of his 11 career decisions. Fili is also a successful takedown artist with decent grappling ability. This will be Fili’s third career fight in Las Vegas.

Charles Jourdain enters this fight with a 10-2 record and has won 70 percent of his fights by knockout. Jourdain has won five of his last six fights and is coming off a December win over Doo Ho Choi. Jourdain is averaging 4.85 significant strikes per minute with an accuracy percentage of 43 percent. Jourdain is averaging zero takedowns with an accuracy percentage of zero percent. Jourdain redeemed himself with an impressive knockout victory at UFC Fight Night 165 and is now 1-1 under the UFC banner. Jourdain is an exciting, athletic fighter who has a reckless mentality standing up and will throw jut about anything at any moment. Jourdain likes to throw combinations and while he’s a very unpredictable, he has impressive cardio and can keep up a big work rate for three rounds. Jourdain hasn’t shown much on the ground through two UFC fights, but his wrestling isn’t bad judging off past fights and his athletic ability should help him on the canvas. This will be Jourdain’s second career fight in the United States.

Fili should be the favorite based on experience and track record, and he’s never lost back-to-back fights in his career, so history is on his side here. However, Jourdain has star potential and is very explosive and athletic, two things that make underdogs live. Many casual fans may not be aware of Jourdain and his ability, but the guy has a little Anthony Pettis to his fighting style, and his striking, kickboxing and clinch work is above average.