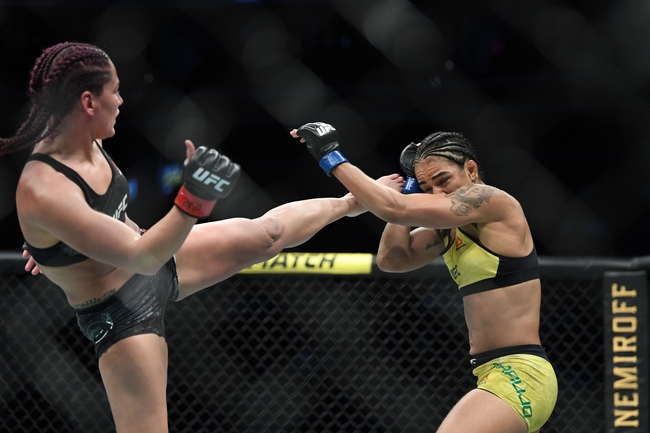 Jessica Eye enters this fight with a 15-7 record and has won 73 percent of her fights by decision. Eye has won four of her last five fights and is coming off a December win over Viviane Araujo. Eye is averaging 3.79 significant strikes per minute with an accuracy percentage of 38 percent. Eye is averaging 0.46 takedowns with an accuracy percentage of 45 percent. Eye missed weight at UFC 245, but she dominated for three rounds and won a clear decision after landing 100 total strikes and making up for her performance against Valentina Shevchenko. At nearly 34 years old, it’s important Eye continues to build on this recent success and possibly put her in the title conversation one more time. Eye is mainly known for her striking and her aggressiveness, as she’s often a fast starter and can be a bit sloppy at times due to the amount of shots she throws. Eye doesn’t have much game changing power, but her work rate is why she’s been able to win 11 of her 16 career decisions. Eye doesn’t exactly do anything spectacular and her ground game is questionable at best, but she’s simply an aggressive, tough fighter who doesn’t back down from a brawl. While the results can sometimes be a mixed bag, you can respect Eye’s toughness and gamesmanship, knowing she’s going to compete and is a tough finish for opponents. This will be Eye’s fourth career fight in Las Vegas.

Cynthia Calvillo enters this fight with a 8-1-1 record and has won 38 percent of her fights by decision. Calvillo has won four of her last six fights and is coming off a December draw against Marina Rodriguez. Calvillo is averaging 4.12 significant strikes per minute with an accuracy percentage of 43 percent. Calvillo is averaging 1.83 takedowns with an accuracy percentage of 43 percent. Calvillo was forced to settle for a draw in her last bout despite landing significantly more strikes and producing three takedowns. In terms of the numbers Calvillo won the fight, and you know she’ll be out to redeem herself this time around and get that nasty taste out of her mouth. Calvillo will also be making her debut at flyweight, as she moves up from strawweight. Calvillo is a polished striker with some pop in her hands and good timing on her counters, and she has a background in BJJ, wrestling and Muay Thai. Calvillo mixes in her takedowns between strikes and has produced submissions in three of her last five wins. While Calvillo is capable of winning a stand up striking battle, she’s most effective when she taps into her ground game and gets the most out of her athleticism. Calvillo has a bit of a brawler feel to her and she’s a strong up and comer who could really turn heads with a victory here. This will be Calvillo’s third career fight in Las Vegas.

Calvillo is the younger, more athletic fighter in this bout and she has enough wrestling and takedown ability to get this fight in her comfort zone. Calvillo is also a tough fighter with a scrappy attitude, so there’s doubt she’d be willing to trade with Eye standing up if needed. With all that said, this is the first time Calvillo will be fighting with added weight and I don’t like that when you consider many fighters are struggling to get in a proper camp these days. Eye is a veteran in this sport, tough as nails and is on a decent winning streak if you remove the knockout loss to one of the baddest fighters in the sport. I wouldn’t be surprised at all if Calvillo won this fight, but I’ve been burned many times in the past when backing fighters who make their debut in a new weight class.

I’ll side with Eye in this pick em.