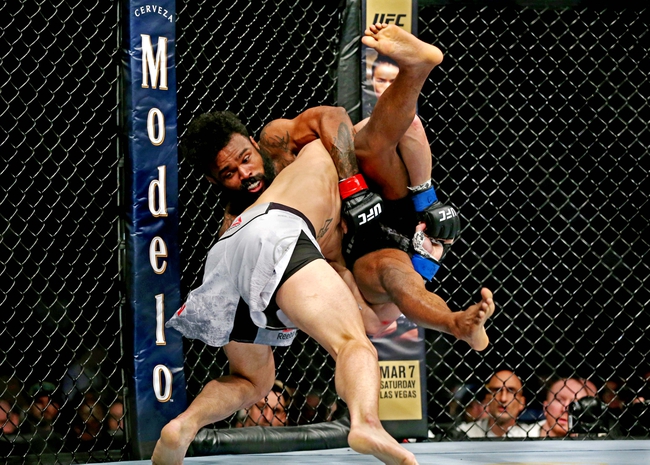 Jordan Griffin enters this fight with a 18-7 record and has won 50 percent of his fights by submission. Griffin has won five of his last seven fights and is coming off a February win over T.J. Brown. Griffin is averaging 2.87 significant strikes per minute with an accuracy percentage of 48 percent. Griffin is averaging 0.35 takedowns with an accuracy percentage of 20 percent. Griffin got his first UFC victory at UFC Fight Night 169 with a second round submission, and he’s now won each of his last five fights by submission. Griffin now looks to win back-to-back fights for the first time in two years. Griffin is an exciting fighter who has a chance to shoot up the rankings if he can start stringing some wins together. Griffin is a tricky southpaw with decent striking skills and raw power, so he can hold his own on his feet when needed. However, Griffin is most effective on the canvas where he has nine career submission victories and doesn’t waste much time finding a hold. Each of Griffin’s last four submission victories have come via a different technique. Griffin has some balance to his attack and still has time to make some noise on this side at jut 30 years old.

Darrick Minner enters this fight with a 24-11 record and has won 88 percent of his fights by submission. Minner has split his last 10 fights and is coming off a February loss against Grant Dawson. Minner is averaging 2.30 significant strikes per minute with an accuracy percentage of 55 percent. Minner is averaging 1.65 takedowns with an accuracy percentage of 33 percent. Minner lost his UFC debut in a second round submission at UFC Fight Night 169, a fight where he also ate 42 total strikes. The good news for Minner is that he has yet to lose back-to-back fights in a career that dates back to 2012. Minner is an experienced fighter who works quickly and has seen 10 of his last 12 victories end in the first round. Minner is a grappler at heart who wants a fight on the canvas and has seen 21 of his 24 carer victories end in submission. Unfortunately, Minner has been submitted in eight of his 11 career losses, so win or lose, you have an idea of how his fights are going to end. On the feet, Minner can be a little too wild and sloppy, so it’s key he gets the fight where he wants it quickly or things could end up bad for him standing up against quality opponents.

We have two fighters who are most comfortable on the canvas and are highly skilled grapplers with majority of their fights ending in submission, so this could end up being a game of chess on the ground and one mistake ends things. That makes Minner an interesting consideration in the underdog role. However, Griffin is the more balanced fighter between the two with far more polished striking and power that could end things before it even goes to the ground. In terms of raw skills, Griffin is somebody who could fly up the rankings and string some nice wins together, and I’d hope that starts soon. I’m high on Griffin’s potential and suggest you watch him closely.

I’ll lay the juice with Griffin.

The pick in this article is the opinion of the writer, not a Sports Chat Place site consensus.
Previous Pick
Which UFC Fighter had the most wins by Knockout?
Next Pick
Tyson Nam vs. Ryan Benoit - 6/13/20 UFC Fight Night 172 Pick, Odds, and Prediction