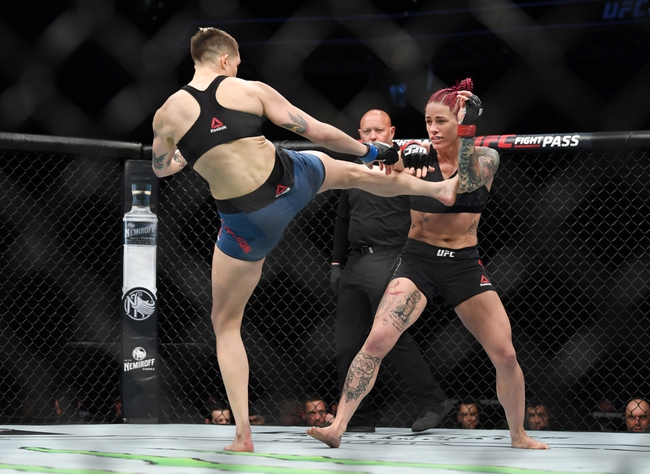 Julia Avila enters this fight with a 7-1 record and has won 43 percent of her fights by decision. Avila has won five of her last six fights and is coming off a July win over Pannie Kianzad. Avila is averaging 3.27 significant strikes per minute with an accuracy percentage of 40 percent. Avila is averaging zero takedowns with an accuracy percentage of zero percent. Avila won her UFC debut at UFC 239 by landing 66 total strikes at a 40 percent clip and getting the nod in a unanimous decision. Avila has now won three straight fights overall and is fighting for the first time in a solid 11 months. Avila has a background in judo and BJJ where she’s currently a brown belt, but she’s most comfortable standing up where she likes to push the pace, throw a lot of combinations and has a strong right hand. We have yet to really see Avila test herself on the canvas, but her takedown defense has held up so far and she’s effective in the clinch as well. Now 32 years old, the time is now for Avila to start making some noise within this division. This will be Avila’s second career fight in Las Vegas.

Gina Mazany enters this fight with a 6-3 record and has won 33 percent of her fights by submission. Mazany has split her last six fights and is coming off a January win over Valerie Barney. Mazany is averaging 2.72 significant strikes per minute with an accuracy percentage of 49 percent. Mazany is averaging 3.18 takedowns with an accuracy percentage of 77 percent. Mazany is fresh off a first round knockout in the KOTC in her lightweight debut, and she’s now back with the UFC after going 1-3 in her previous stint, but it’s important to note she’s not currently under a new contract. Mazany has really struggled under the UFC banner and the last time we saw her, she was getting knocked out by Macy Chiasson at UFC 235. Mazany also missed weight against Sara McMann in her UFC debut, which is always a bad look. Mazany will soon be 32 years old, and she’s primarily a striker with some knockout power and she has a deep boxing background. Mazany also had wonderful takedown success in her four UFC fights and has proven to be an effective grappler with one submission victory to her name, which came in her pro debut back in 2008. This will be Mazany’s second career fight in Las Vegas.

Avila should win this fight, as she looked impressive in her UFC debut, is well rested and is fighting somebody who has had little to no success on this level. This line shouldn’t surprise anybody. With that said, Mazany is probably the more balanced fighter between the two with impressive grappling skills, and she’s fighting to redeem herself. Remember, Mazany isn’t under a new UFC contract and is simply getting a chance here because Karol Rosa couldn’t make it. Mazany could get herself back in the door if she impresses enough.

Because of the big plus money, I’ll take a stab with Mazany, but there’s obviously much better bets out there.