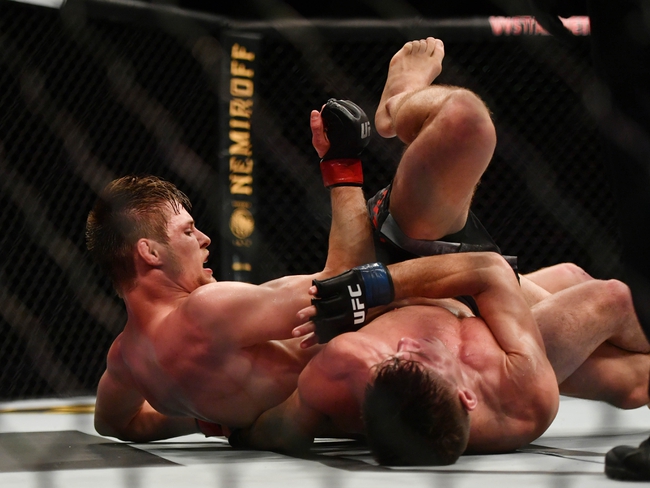 Charles Rosa enters this fight with a 12-4 record and has won 67 percent of his fights by submission. Rosa has split his last eight fights and is coming off a May loss against Bryce Mitchell. Rosa is averaging 3.21 significant strikes per minute with an accuracy percentage of 36 percent. Rosa is averaging 2.35 takedowns with an accuracy percentage of 34 percent. Rosa entered the UFC with a 9-0 record and since then he’s been hit or miss, but he has yet to lose back-to-back fights in his career. Rosa is coming off a fight a month ago where he lost a one-sided unanimous decision where he put out victory little damage. Needless to say, Rosa should be looking to redeem himself after a poor showing at UFC 249. Rosa comes from a deep boxing background and started early in karate, so he’s at his best on his feet where he can unleash his striking and powerful leg kicks. Rosa is a black belt in BJJ and six of his last eight victories have come by submission. Rosa has become quite a balanced fighter who is comfortable anywhere the fight goes, and it’s important he starts stringing some wins together if he hopes to make a dent in this division as he approaches 34 years old. This will be Rosa’s first career fight in Las Vegas.

Kevin Aguilar enters this fight with a 17-3 record and has won 59 percent of his fights by knockout. Aguilar has split his last four fights and is coming off a February loss to Zubaira Tukhugov. Aguilar is averaging 3.73 significant strikes per minute with an accuracy percentage of 36 percent. Aguilar is averaging 0.24 takedowns with an accuracy percentage of 50 percent. Aguilar is coming off a first round knockout loss at UFC Fight Night 168, a fight where he landed just nine total strikes. Aguilar has now lost back-to-back fights and looks for his first victory in over a year. Aguilar is primarily a striker with 10 of his 17 victories coming by knockout, and he throws punches with a purpose and follows up anything on the canvas with serious ground and pound. Aguilar is effective with counters and throws heavy combinations that usually ends with an overhand right that can drop an opponent if landed cleanly. Aguilar has shown very little in terms of a ground game in his UFC bouts, but he does have solid takedown defense and that’s key given his standup style. This will be Aguilar’s third career fight in Las Vegas.

Aguilar I guess should be the favorite considering Rosa didn’t look good his last time out and is now fighting for the second time within a month. During the pandemic, it’s hard for fighters to properly train for one fight, but two within such a short span is damn near impossible. With that said, Rosa is the more balanced fighter between the two and his black belt in BJJ and ground success gives him a serious edge if he can get this fight on the canvas. We haven’t seen Aguilar dragged into deep waters yet. I also expect Rosa to come out with some edge to him given that he didn’t look good his last time out.

I’ll take Rosa and the plus money.