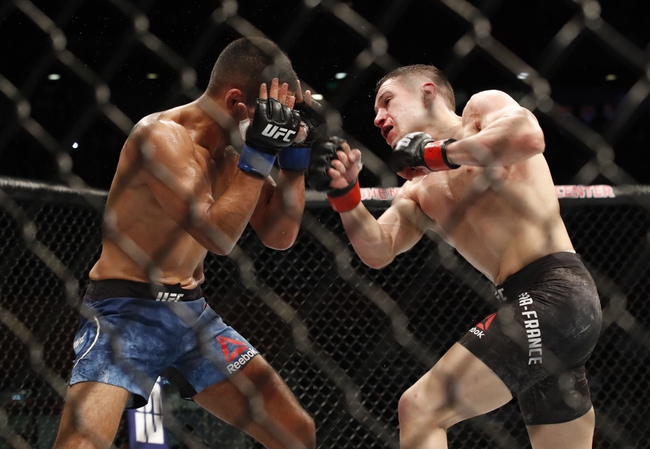 Jordan Espinosa enters this fight with a 14-7 record and is winning 50 percent of his fights by submission. Espinosa has won five of his last seven fights and is coming off a January loss to Alex Perez. Espinosa is averaging 4.25 significant strikes per minute with an accuracy percentage of 55 percent. Espinosa is averaging 0.85 takedowns with an accuracy percentage of 20 percent. Espinosa is another fighter who is in need of a victory, as he’s lost back-to-back fights and both losses have been first round submissions. Espinosa has now been submitted four times in seven career losses and hopes to avoid three straight losses for the first time in his career. Espinosa is a bouncy, athletic fighter with a strong upper body and you’d think he’d have more success standing up than he does. However, Espinosa is most comfortable on the canvas where he has impressive scrambling skills and is very skilled at finding a submission hold. Each of Espinosa’s first four victories were submissions, and that includes his pro debut back in 2012 with a brabo choke. Espinosa is always going to like his chances on the ground, even if his last two bouts didn’t go his way.

Mark De La Rosa enters this fight with a 11-4 record and is winning 55 percent of his fights by submission. De La Rosa has split his last eight fights and is coming off a February loss to Raulian Paiva. De La Rosa is averaging 3.28 significant strikes per minute with an accuracy percentage of 36 percent. De La Rosa is averaging 0.66 takedowns with an accuracy percentage of 15 percent. De La Rosa is riding a three-fight losing streak and is fresh off a second round knockout loss a few of months ago at UFC Fight Night 167. While he’ll only be 26 years old in a couple of months, it’s safe to say this is pretty much a must win fight for De La Rosa if he hopes to keep landing on big cards. De La Rosa started his BJJ training at a young age and is a belt belt while producing six career submissions, but he seems more comfortable on his feet where he can unleash his boxing ability. De La Rosa is a natural boxer with great hand speed, head movement and footwork, and he produced a knockout victory in his fourth pro MMA contest. De La Rosa is simply too talented to let these losses continue, so it’s key he finds a way to get the job done in this bout. This will be De La Rosa’s second career fight in Las Vegas.

You can make a case for either one of these fighters, as they’re pretty much in the same boat. Both extremely talented but have yet to string wins together on the UFC level and are kind of in a must win situation in this fight. Espinosa and his impressive ground game is probably what makes him the favorite here, but De La Rosa is a black belt in BJJ and has the wrestling to counter that if needed. De La Rosa would have the clear edge standing up, and his boxing ability is some of the best you’re going to find in this division. De La Rosa is probably the more balanced fighter between the two and probably needs this fight more given the three straight losses.