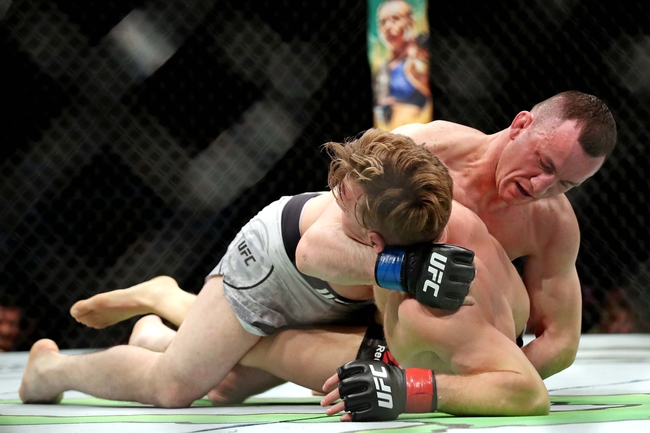 Merab Dvalishvili enters this fight with a 10-4 record and is winning 70 percent of his fights by decision. Dvalishvili has won six of his last eight fights and is coming off a February win over Casey Kenney. Dvalishvili is averaging 3.84 significant strikes per minute with an accuracy percentage of 37 percent. Dvalishvili is averaging 7.80 takedowns with an accuracy percentage of 45 percent. Dvalishvili has won each of his last three fights and is coming off a decision victory where he landed 114 total strikes and produced 12 takedowns. All three of those victories came by decision, and Dvalishvili has now won seven of his 10 career decisions. Dvalishvili started his fighting career with a background in wrestling, and he mixed in Sambo and Judo along the way. Dvalishvili shows decent boxing skills in his standup and he’s a really athletic fighter who mixes in leg kicks and can be a bit unpredictable on his feet while throwing a strong overhand. However, Dvalishvili is most known for his takedown ability and his wrestling skills, and he becomes a point fighter on the canvas where he just wears on his opponent. Dvalishvili has just one career submission victory and that was more than three years ago against Sukhrob Aydarbekov. This will be Dvalishvili’s first career fight in Las Vegas.

Ray Borg enters this fight with a 13-5 record and is winning 46 percent of his fights by submission. Borg has split his last eight fights and is coming off a May loss to Ricky Simon. Borg is averaging 1.52 significant strikes per minute with an accuracy percentage of 52 percent. Borg is averaging 3.89 takedowns with an accuracy percentage of 50 percent. Borg was just beat up for three rounds and while it was a split decision, the fight wasn’t all that close despite a late surge from the Tazmexican Devil. There’s not really a case to be made for Borg winning that fight, as he ate several big strikes and was taken down with ease in all three rounds. It’s going to be interesting to see how Borg improves just one month later. Borg is a smooth fighter who is stronger than he looks and usually gets the fight on the ground where he wants it. Borg has a strong takedown percentage and he usually controls top position where he has an effective ground and pound. Borg scrambles well, can reverse position quickly and has six submission victories on his resume. However, Borg may be biting off a bit more than he can chew right now, as this will be his third fight since February and his previous two fights went the distance. This will be Borg’s fourth career fight in Las Vegas.

After seeing Borg struggle with the takedown defense against Simon as well as the length standing up, I have serious concerns of how he’s going to do against Dvalishvili, who is a takedown machine and also has a five-inch reach advantage. If Borg can’t stop the takedowns and allows Dvalishvili to drag him into deep waters, he’s going to lose another three rounds and be on the losing side in four of his last six bouts. I also question the work rate, as Borg has already fought six rounds since February and is jumping right back into the octagon. Props to Borg for stepping up, especially during these times, but it’s extremely difficult to fight every other month.

The price isn’t great, but this is a fight Dvalishvili should win.