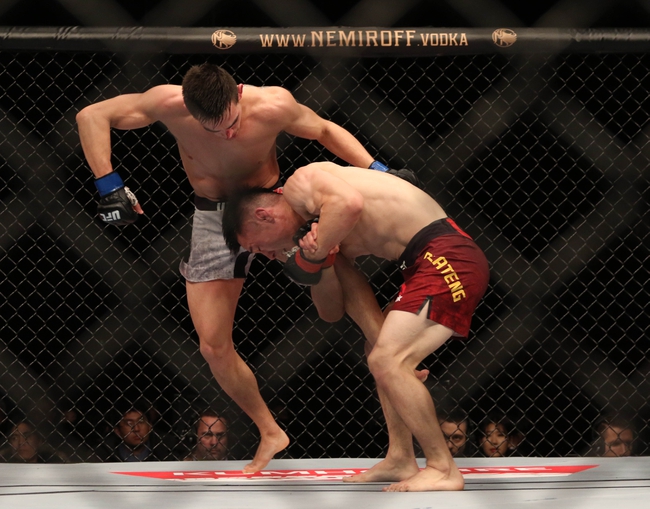 Ryan Benoit enters this fight with a 10-6 record and has won 80 percent of his fights by knockout. Benoit has split his last 10 fights and is coming off a December loss against Alateng Heili. Benoit is averaging 2.80 significant strikes per minute with an accuracy percentage of 40 percent. Benoit is averaging 0.20 takedowns with an accuracy percentage of 16 percent. Benoit has been a mixed bag over the last seven years and is coming off a split decision loss at UFC Fight Night 165 where he landed more total strikes but was taken down four times. While the results have been inconsistent, Benoit still has yet to lose back-to-back fights in his career. Benoit is an explosive, athletic fighter with terrific striking power in both hands and impressive leg kicks that he hides well. Benoit has seen eight of his 10 wins come by knockout and despite the wild, aggressive style, he’s never been knocked out himself. Benoit has been on the losing side of four of his five career decisions, which is a sign of not being able to keep up the wild pace for three rounds. Benoit is fun to watch and can end things at any moment, but he’s lost four of his last seven fights that made it out of the first round. This will be Benoit’s third career fight in Las Vegas.

Tyson Nam enters this fight with a 18-11-1 record and has won 56 percent of his fights by knockout. Nam has split his last six fights and is coming off a February loss against Kai Kara-France. Nam is averaging three significant strikes per minute with an accuracy percentage of 27 percent. Nam is averaging zero takedowns with an accuracy percentage of zero percent. Nam drops to 0-2 under the UFC banner after eating 78 total strikes and producing 52 total strikes of his own. At soon to be 37 years old, it’s important that Nam ends this losing stretch if he hopes to keep landing on decent cards. Nam has a deep fighting background that started at a young age with judo, boxing and kickboxing, and that’s allowed him to be most effective on his feet where he hasten strike knockout power and his lengthy frame makes those leg kicks dangerous. Nam has yet to be taken down on the UFC level and he has never been submitted in his pro career despite 30 total fights. This will be Nam’s first career fight in Las Vegas.

This should be a fun fight between two guys who have similar styles and should get a fight standing up where they’re most comfortable. Nam is the more experienced fighter with probably the better gas tank, but Benoit has the crisper boxing and has more power in his shots. Benoit is going to push the pace and could make Nam a bit uncomfortable, especially in a smaller octagon at the APEX. This is a fight that should benefit Benoit greatly. We also have to remember Benoit has never lost back-to-back fights in his career.