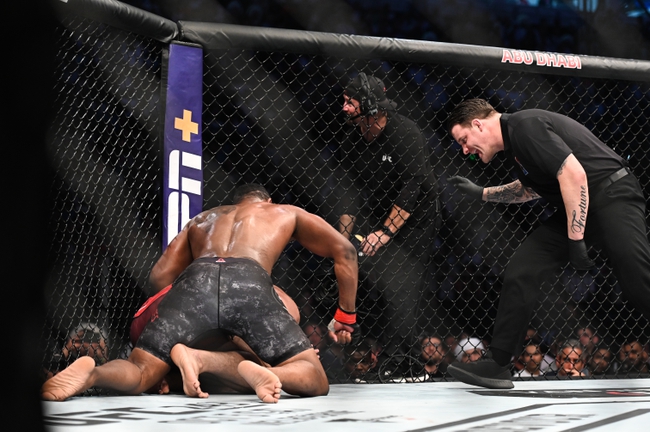 Curtis Blaydes enters this fight with a 13-2 record and has won 77 percent of his fights by knockout. Blaydes has won five of his last six fights and is coming off a January win over Junior dos Santos. Blaydes is averaging 3.74 significant strikes per minute with an accuracy percentage of 51 percent. Blaydes is averaging 6.63 takedowns with an accuracy percentage of 55 percent. Blaydes is coming off a massive victory at UFC Fight Night 166 where he produced a second round knockout over a legend, and he’s now finished four of his last six victories. Blaydes continues to climb the rankings and make a strong case as the best heavyweight in the business. Blaydes is a rare heavyweight in that he’s highly aggressive with his takedowns and has extreme success with his attempts, often coming in with a tackle form and picking up and throwing around some of the biggest guys in the sport. Once on the canvas, Blaydes has a nasty ground and pound, and it’s where he’s finished a lot of his fights. Blaydes can obviously hold his own standing up and has one-punch knockout potential, but he’s most effective on the ground and usually follows up his opponents strike attempt with a takedown rather than a counterstrike. With a background in wrestling, Blaydes is one of the more balanced fighters in this division and is someone who could soon be champion in this weightclass. This will be Blaydes’ second career fight in Las Vegas.

Alexander Volkov enters this fight with a 31-7 record and has won 65 percent of his fights by knockout. Volkov has won seven of his last eight fights and is coming off a November win over Greg Hardy. Volkov is averaging 5.36 significant strikes per minute with an accuracy percentage of 60 percent. Volkov is averaging 0.75 takedowns with an accuracy percentage of 75 percent. Volkov is coming off a rather easy decision victory at UFC Fight Night 163 where he landed 86 total strikes at a 56 percent clip. Volkov is now 5-1 under the UFC banner and has lost just one fight in the last four years. Volkov is a striker at heart who is most comfortable standing up and has 20 victories by knockout. Volkov has a reach of 81 inches, very heavy hands and has been deadly accurate while throwing with a purpose. Volkov is always looking to stay busy in the octagon and has a very successful ground and pound if things are ever taken to the canvas. With a brown belt in Kyokushin, Volkov is one of the cleaner strikers in this division. This will be Volkov’s second career fight in Las Vegas.

This is a hell of a price for Volkov, a lengthy fighter with impressive striking, the ability to fight in the clinch and some toughness, as we’ve seen him eat some shots and keep coming forward. Volkov isn’t a chump who should be nearly a +250 underdog. The price makes me really want to back Volkov in this spot. With that said, Blaydes appears to be a man on a mission for a title and is possibly the most well rounded heavyweight in the game right now. Blaydes has powerful striking, but he’s a bear once he gets his opponent in the clinch and eventually on the ground. I’d love a cheaper price, but I’m not betting against Blaydes in his current form.