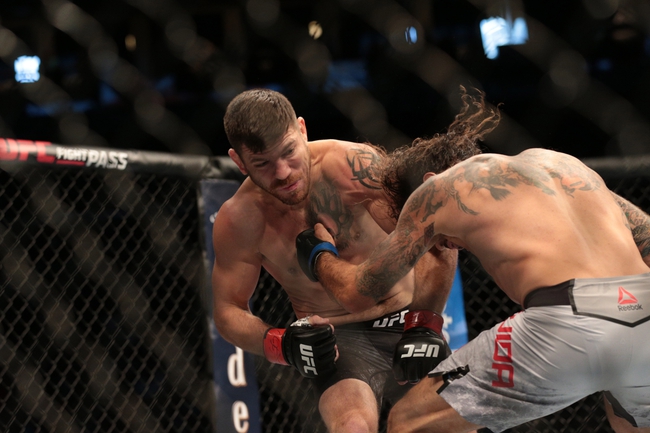 Clay Guida enters this fight with a 35-19 record and has won 40 percent of his fights by decision. Guida has split his last 10 fights and is coming off an August loss against Jim Miller. Guida is averaging 2.45 significant strikes per minute with an accuracy percentage of 33 percent. Guida is averaging 3.39 takedowns with an accuracy percentage of 38 percent. Guida is coming off a first round submission loss at UFC on ESPN 5, and he’s now been submitted in the first round in three of his last seven fights. Guida has been a mixed bag the last several years and you have to question if age plays a part, as he’s approaching 39 years old. Guida is not the most accurate striker in the world and may be a bit too wild for his own good, but he’s one of the more entertaining fighters in MMA history. Guida is a ball of energy and as tough as they come, and his work rate is up there with the best in the sport. Guida always comes forward, goes for takedowns aggressively, throws relentless strikes and has been in many wars over the years. Guida has also been knocked out just twice in his career, which is a sign of his toughness given his fighting style. This will be Guida’s eighth career fight in Las Vegas.

Bobby Green enters this fight with a 24-10-1 record and has won 38 percent of his fights by submission. Green has lost six of his last seven fights and is coming off a November loss to Francisco Trinaldo. Green is averaging 4.95 significant strikes per minute with an accuracy percentage of 49 percent. Green is averaging 1.12 takedowns with an accuracy percentage of 29 percent. Green is in desperate need of a victory, as he’s won just one fight since his victory at UFC on Fox 12 and has lost each of his last two fights. Green is coming off a losing effort where he landed 31 more total strikes than his opponent. Green comes from a wrestling and boxing background, and he has a blue belt in BJJ. Green seems more polished as a striker, as he’s heavy handed, has good ground and pound and closes the distance well standing up. Green also has nine career submission victories, as he has decent scrambling skills and three of those victories have come via the guillotine choke. The tools are there for Green to be a threat, but he’s on a nasty losing stretch that has to play a role on his confidence. This will be Green’s fifth career fight in Las Vegas.

Green is the bigger and more balanced fighter in this spot, as I’d give him the edge on the canvas given his wrestling background. However, it’s a tough sell laying this price with Green given the massive drought he’s in with the lack of results. Guida can be reckless, has a history of being submitted and takes a lot of punishment, but he’s a warrior in that octagon and is going to put up a fight. We know what we’re getting with Guida and that’s all you ask for from a fighter.

I’ll take my chances with Guida and the much better price.