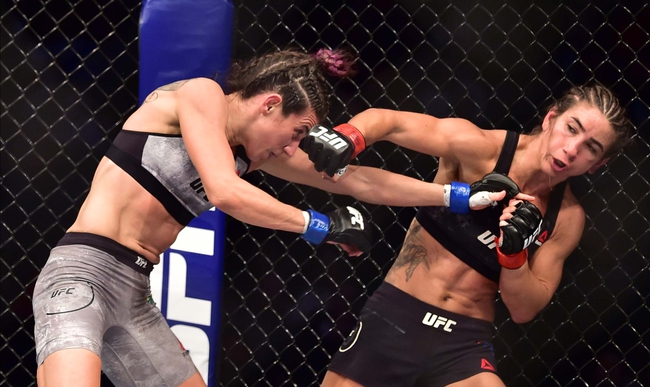 Tecia Torres enters this fight with a 10-5 record and has won 90 percent of her fights by decision. Torres has lost her last four fights, and she’s coming off an August loss to Marina Rodriguez. Torres is averaging 4.04 significant strikes per minute with an accuracy percentage of 47 percent. Torres is averaging 0.67 takedowns with an accuracy percentage of 14 percent. Torres is in desperate need for a victory to snap this losing streak, as she hasn’t won a fight since UFC 218 and has lost five of her last eight UFC fights overall. Torres is coming off a loss where she ate 98 strikes and was taken down once. Torres is primarily a striker who relies on her background in taekwondo and karate, so there’s a lot of stand up striking, combinations and leg kicks. Torres is also a blue belt in BJJ and her ground game has improved over the years. Despite the losing streak, all five of Torres’ losses have come by decision, which explains her toughness and her fight IQ to avoid being caught in a bad spot to be finished. This will be Torres’ fifth career fight in Las Vegas.

Brianna Van Buren enters this fight with a 9-2 record and has won 44 percent of her fights by decision. Van Buren has won her last four fights, and she’s coming off a July win over Lívia Renata Souza. Van Buren is averaging 4.80 significant strikes per minute with an accuracy percentage of 38 percent. Van Buren is averaging three takedowns with an accuracy percentage of 75 percent. Van Buren won her UFC debut in dominating fashion by landing 88 total strikes and producing three takedowns. Van Buren now hasn’t lost a fight in over five years and has a chance to really make some noise in this division as she’s approaching only 27 years old. Van Buren has a wrestling background and goes for double leg takedowns and looks to gain top position. Van Buren has a solid ground and pound and has produced two rear-naked chokes in her career. Van Buren is also comfortable on her feet with quick hands and a high work rate. Van Buren is highly aggressive in the octagon and looks to push the pace, overwhelming her opponent. This will be Van Buren’s first career fight in Las Vegas.

On paper Van Buren should win this fight and many aren’t going to give Torres a chance because she’s lost four straight, while her opponent has won four straight and looked flawless in her debut. However, Torres has had easily the toughest stretch we’ve seen in a while, fighting four quality names and taking them all to decisions. If steel sharpens steel, Torres is ready to slice somebody in half. It’s hard to fault Torres for her losing stretch, and you can even argue she’s become a better fighter because of it.

I’ll take a shot with Torres and the plus money.