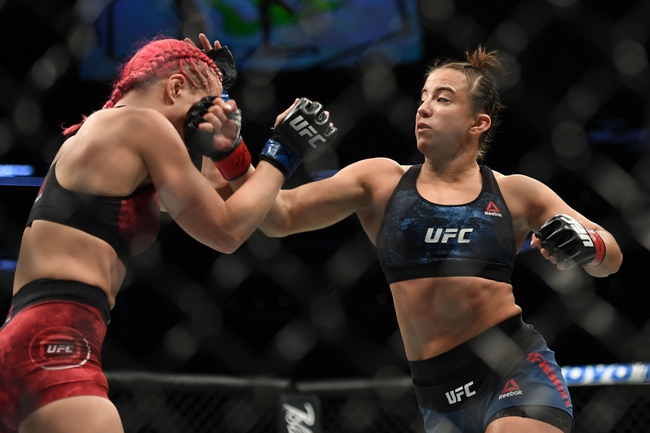 Cortney Casey enters this fight with a 9-7 record and has won 44 percent of her fights by submission. Casey has split her last 12 fights and is coming off a May win over Mara Romero Borella. Casey is averaging 4.72 significant strikes per minute with an accuracy percentage of 38 percent. Casey is averaging 0.4 takedowns with an accuracy percentage of 30 percent. Casey is coming off a first round submission victory at UFC on ESPN 8 that earned performance of the night honors. Casey hasn’t won back-to-back fights in four years, and it’s going to be interesting to see how she responds to fighting twice within a single month. Casey is a brawler in the purest form, as she throws a ton of strikes, is willing to trade punches and has a proven chin with her only being finished once in her career. Casey doesn’t have the best takedown defense in the world and could be better at avoiding strikes, but she’s as tough as nails and is going to get her shots in regardless of the result. Casey is also a brown belt in BJJ and two of her last four victories have been submissions. This will be Casey’s second career fight in Las Vegas.

Gillian Robertson enters this fight with a 7-4 record and has won 71 percent of her fights by submission. Robertson has won five of her last seven fights and is coming off an October loss to Maycee Barber. Robertson is averaging 2.18 significant strikes per minute with an accuracy percentage of 50 percent. Robertson is averaging 3.44 takedowns with an accuracy percentage of 47 percent. Robertson is coming off a first round knockout loss at UFC on ESPN 6 and she’s now been finished twice in her last four fights. Robertson has yet to lose back-to-back fights in her career. Robertson comes from a kickboxing background and is quite accurate with her striking overall, but she’s far and away more comfortable on the canvas. Robertson is a polished takedown artist and an above-average wrestler that allows her to gain position on the canvas and eventually find a submission hold. Robertson has five career submission victories on her resume and three of those victories have come via the rear-naked choke. At just 25 years old, Robertson has some of the better ground game within this division. This will be Robertson’s second career fight in Las Vegas.

Casey is probably the more balanced fighter in this matchup and probably has the edge standing up, but she’s also somebody who takes a lot of damage and has been in many hard to judge fights. Casey also has questionable takedown defense, and she’s running into a takedown machine in Robertson who usually controls the fight. If Casey can’t keep this fight on the feet and use her striking, she’s going to have a hard time inking her teeth into this match.

I like Robertson to get the job done here.