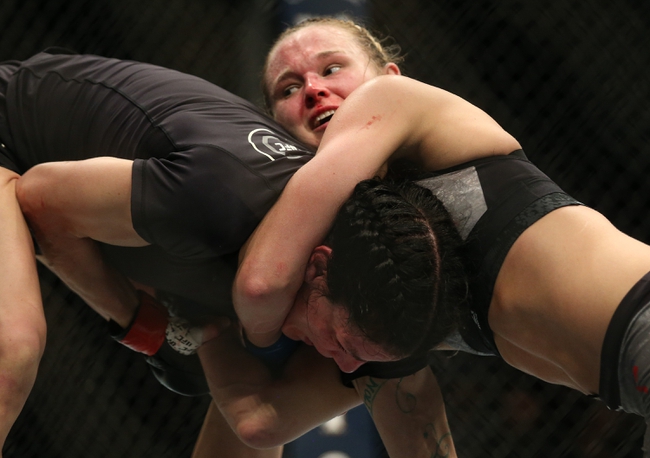 Roxanne Modafferi enters this fight with a 24-16 record and has won 63 percent of her fights by decision. Modafferi has split her last six fights and is coming off a January win over Maycee Barber. Modafferi is averaging 3.06 significant strikes per minute with an accuracy percentage of 31 percent. Modafferi is averaging 1.45 takedowns with an accuracy percentage of 21 percent. Modafferi has been hit or miss the last couple of years and looks for back-to-back wins for the first time since 2017. Modafferi is coming off a one-sided decision win at UFC 246 where she landed 112 total strikes and produced a takedown. Modafferi has a background in taekwondo, and she’s a black belt in BJJ and a brown belt in judo. At almost 38 years old, Modafferi is what she is at this point, and that’s a decent striker standing up who throws overhands and leg kicks, and she has a relentless ground and pound once on the canvas. Modafferi doesn’t take a ton of damage and she doesn’t have a lot of finish ability, which is why 27 of her 40 career fights have ended in decision. A lot of times Modafferi isn’t the most exciting fighter on the card. This will be Modafferi’s sixth career fight in Las Vegas, her current residence.

Lauren Murphy enters this fight with a 12-4 record and has won 67 percent of her fights by knockout. Murphy has split her last eight fights and is coming off a February win over Andrea Lee. Murphy is averaging 3.76 significant strikes per minute with an accuracy percentage of 38 percent. Murphy is averaging 1.03 takedowns with an accuracy percentage of 32 percent. Murphy is coming off a tight decision victory at UFC 247 where both her and opponent landed 107 strikes, but it was her two takedowns that likely gave her the edge. Murphy has won her last two fights and is 3-1 since making her flyweight debut at The Ultimate Fighter 26. Murphy started her pro career with very little experience, and she’s become an effective striker with knockout pop and uses her knees and elbows extremely well. Murphy is also an effective grappler with decent takedown defense, but none of her 16 career fights have ended in a submission. This will be Murphy’s second career fight in Las Vegas.

This should be an interesting fight between two aging women who have actually trained together in the past. Modafferi obviously has the experience edge and her black belt in BJJ would give her the edge on the canvas if it ever got there. However, Modafferi has had issues stringing wins together as she gets older and she’s a fighter who usually forces the judges to make a decision, which is always risky. Murphy has the pop to finish a fight on her own terms and she has the better stand up striking overall.

Give me Murphy in the slight upset.