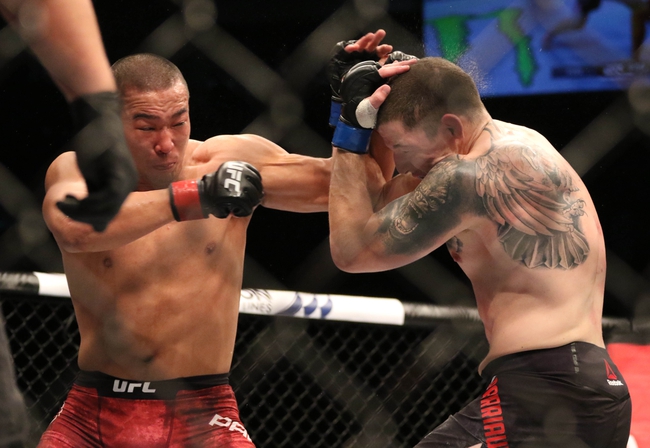 Marc-Andre Barriault enters this fight with a 11-4 record and has won 73 percent of his fights by knockout. Barriault has lost his last three fights and is coming off a December loss to Jun Yong Park. Barriault is averaging 3.53 significant strikes per minute with an accuracy percentage of 43 percent. Barriault is averaging 0.33 takedowns with an accuracy percentage of 16 percent. Barriault falls to 0-3 under the UFC banner and is coming off a loss where he ate 83 total strikes and was taken down five times. Barriault has seen all four of his career losses come by decision. Barriault is a strong guy who is most known for his knockout power, as he throws haymakers, uppercuts and will mix in some knees in the clinch as well. Barriault can be a bit wild on his feet, but he swings with a purpose and has eight knockout wins on his resume. Barriault is also a successful takedown artist and can finish things quickly if he gains top position and can unload with ground and pound. This will be Barriault’s first career fight in the United States.

Oskar Piechota enters this fight with a 11-3-1 record and has won 45 percent of his fights by submission. Piechota has lost his last three fights and is coming off a December loss to Punahele Soriano. Piechota is averaging 3.19 significant strikes per minute with an accuracy percentage of 55 percent. Piechota is averaging 0.76 takedowns with an accuracy percentage of 50 percent. Piechota is coming off a rough loss at UFC 245 where he could have easily been finished a lot earlier, but he ended up losing by knockout in the first round regardless. Piechota was still an undefeated fighter after his win at UFC Fight Night 126, but he hasn’t won a fight since. Piechota is a lengthy fighter for this division with a 76-inch reach, and he has some knockout power in his hands while using his legs well. Piechota is also a black belt in BJJ and has won three fights via the triangle choke. At 30 years old, there’s still time for Piechota to right the ship, but it’s going to be interesting to see how he responds from such a vicious loss. This will be Piechota’s third career fight in Las Vegas.

I guess the reach advantage of Piechota makes him the favorite here, on top of him having the better ground game given his deep background in BJJ at a young age. The problem here is that Barriault is a violent, aggressive striker with extreme knockout power, and he’s fighting a guy who was caught multiple times. Piechota has a bad habit of keeping his chin up and leaving himself exposed, and Barriault is a guy who can expose that. As long as Barriault keeps this fight on the feet, you have to like him to pull off the minor upset.

Barriault is a solid pick.